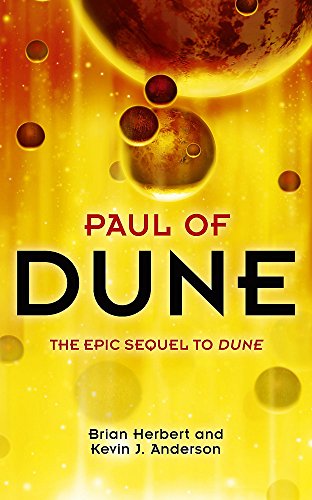 The untold story of the twelve lost years between DUNE and DUNE MESSIAH based on Frank Herbert's own notes and hints.

Between the end of Frank Herbert's Dune and his next novel Dune Messiah lies a mystery: how a hero adored by a planet became a tyrant hated by a universe.

Paul of Dune begins the story of those twelve fateful years and the wars of the jihad of Paul Muad'Dib.

It is an epic of battle and betrayal; of love and idealism; of ambition and intrigue. Above all, it is the story of how Paul Atreides - who achieved absolute power when scarcely more than a boy - changes from an idealist into a dictator who is the prisoner of the bureaucrats and fanatics who surround him.

Have you read Dune? And have you read Brian Herbert and Kevin J. Anderson's novels continuing the story? The latest are Hunters of Dune and Sandworms of Dune.

'[Herbert and Anderson] do a great job in investing the plot with heft and complexity and the narrative with pace and momentum, and conveying the sheer ferocity of the betrayals and duplicities . . . a rare, rattling page-turner that no Dune adherent will pass up.' * Kirkus Reviews on SANDWORMS OF DUNE *
Frank Herbert would surely be delighted and proud of this continuation of his vision. * Dean Koontz *
Those who long to return to the world of desert, spice and sandworms will be amply satisfied. * The Times *
A triumphant climax to the history of the Dune universe. * Bookseller on THE BATTLE OF CORRIN *
'For those of us who grew up with the world of spice and sand - how gratifying to revisit characters who felt like old friends, now brought to a satisfying conclusion.' * My Weekly on SANDWORMS OF DUNE *

GOR001716772
Paul of Dune by Kevin J. Anderson
Kevin J. Anderson
Used - Very Good
Paperback
Hodder & Stoughton General Division
2009-04-30
656
0340837551
9780340837559
N/A
Book picture is for illustrative purposes only, actual binding, cover or edition may vary.
This is a used book - there is no escaping the fact it has been read by someone else and it will show signs of wear and previous use. Overall we expect it to be in very good condition, but if you are not entirely satisfied please get in touch with us.