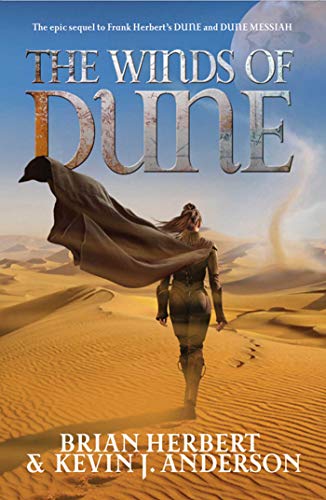 The Winds of Dune
by Kevin J. Anderson

The Winds of Dune Summary

The Winds of Dune by Kevin J. Anderson

Between the end of Frank Herbert's Dune and his next novel, Dune Messiah, lies an intriguing mystery: how a hero adored by a planet became a tyrant hated by a universe.

Paul Atreides is the man who overthrew a corrupt empire and then launched a terrible jihad across the galaxy, shedding the blood of trillions. The now-hated tyrant, the blind emperor Paul Muad'Dib, has walked off into the endless desert of the planet Arrakis, known as Dune, leaving his turbulent empire without guidance. It is up to his mother Jessica, with her daughter Alia, the brave troubadour-warrior Gurney Halleck, the resurrected Duncan Idaho, the Fremen leader Stilgar, as well as Paul's wife-in-name and biographer, Princess Irulan, to try and hold an empire together even as it tears itself apart from within and without.

Customer Reviews - The Winds of Dune

Kevin J. Anderson has over 20 million books in print in 30 languages worldwide. He is the author of, among others, the X-FILES novels, GROUND ZERO and the JEDI ACADEMY trilogy of STAR WARS novels - the three bestselling SF novels of 1994. He has also co-written the international bestselling prequels to Frank Herbert's monumental DUNE series. He has won, or been nominated for, many awards including the Nebula Award and the Bram Stoker Award. Visit his website www.wordfire.com The son of Frank Herbert (1920-86), Brian Herbert is a bestselling SF author in his own right. He has also written Dreamer of Dune, a comprehensive, Hugo Award-nominated biography of Frank Herbert.

GOR002001367
The Winds of Dune by Kevin J. Anderson
Kevin J. Anderson
Used - Very Good
Paperback
Simon & Schuster Ltd
2010-05-27
448
1849830274
9781849830270
N/A
Book picture is for illustrative purposes only, actual binding, cover or edition may vary.
This is a used book - there is no escaping the fact it has been read by someone else and it will show signs of wear and previous use. Overall we expect it to be in very good condition, but if you are not entirely satisfied please get in touch with us.