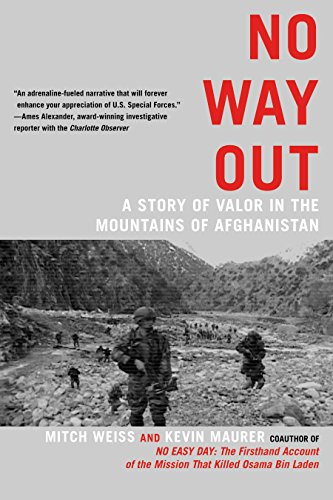 No Way Out
by Kevin Maurer

Out of Stock
$33.99
inc. GST
Weiss and Maurer recount the story of an elite team of Special Forces who were ambushed while on their mission to capture a terrorist in Afghanistan, and the 10 men from the unit who earned Silver Stars--the Army's third highest award for combat valor.
Good
Only 0 left

No Way Out Summary

No Way Out: A Story of Valor in the Mountains of Afghanistan by Kevin Maurer

In a remote, enemy-held valley in Afghanistan, a Special Forces team planned to scale a steep mountain to surprise and capture a terrorist leader. But before they found the target, the target found them...

The team was caught in a deadly ambush that not only threatened their lives, but the entire mission. The elite soldiers fought huddled for hours on a small rock ledge as rocket-propelled grenades and heavy machine-gun fire rained down on them. With total disregard for their own safety, they tended to their wounded and kept fighting to stay alive. When the battle finally ended, ten soldiers had earned Silver Stars--the Army's third highest award for combat valor. It was the most Silver Stars awarded to any unit in one battle since Vietnam.

Based on dozens of interviews with those who were there, No Way Out is a compelling narrative of an epic battle that not only tested the soldiers' mettle but serves as a cautionary tale. Be careful what you ask a soldier to do because they will die trying to accomplish their mission.

No Way Out Reviews

"OP Commando Wrath was an operational marshmallow of the highest order where Mission Impossible and Murphy's Law collided head on with some of the meanest mothers in the valley--Green Berets from ODA 3336. It's Blackhawk Down in the Afghan Mountains!"--Dalton Fury, author of Black Site
"The book is not just a cautionary tale in warfare, but a powerful portrait of the men who fought to save each other from certain death."--Michael D. Sallah, investigative reporter for The Miami Herald and winner of the Pulitzer Prize for Investigative Reporting

"It's a must-read for anyone who wants to know how modern battles are fought--and how they should be."--Ames Alexander, award-winning investigative reporter with The Charlotte Observer

"In this compelling, multi-dimensional account, Weiss and Maurer remind us of the extraordinary risks soldiers take and the sacrifices they make every day both for their country, and for each other."--Publishers Weekly

Kevin Maurer has covered special operations forces for eight years. He has been embedded with the U.S. Special Forces in Afghanistan six times in the last five years and spent ten weeks with a team of Green Berets in Afghanistan in 2010. He has embedded with American soldiers in Iraq, east Africa and Haiti. The author of four books, he co-wrote a memoir of a Korean War veteran, a book about the 2006 Battle of Sperwan Ghar, and is the co-author of No Easy Day: The Firsthand Account of the Mission That Killed Osama Bin Laden.

GOR010255425
No Way Out: A Story of Valor in the Mountains of Afghanistan by Kevin Maurer
Kevin Maurer
Used - Good
Paperback
Penguin Putnam Inc
2012-12-31
352
0425253406
9780425253403
N/A
Book picture is for illustrative purposes only, actual binding, cover or edition may vary.
The book has been read but remains in clean condition. All pages are intact and the cover is intact. Some minor wear to the spine.