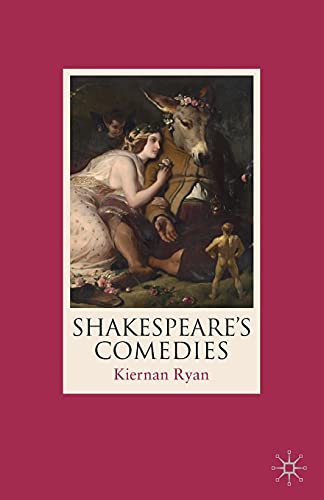 In Stock
$50.99
inc. GST
In this groundbreaking book one of the most original and compelling voices in contemporary Shakespeare criticism undertakes a detailed study of the extraordinary comedies Shakespeare wrote during his first decade as a dramatist. Lively and readable, Ryan lets each play speak for itself, transforming our understanding of Shakespearean comedy.
Very Good
Only 1 left

In this groundbreaking book one of the most original and compelling voices in contemporary Shakespeare criticism undertakes a detailed study of the ten extraordinary comedies Shakespeare wrote during his first decade as a dramatist: The Comedy of Errors, The Taming of the Shrew, The Two Gentlemen of Verona, Love's Labour's Lost, A Midsummer Night's Dream, The Merchant of Venice, The Merry Wives of Windsor, Much Ado About Nothing, As You Like It and Twelfth Night.

Through close readings of these plays Kiernan Ryan reveals Shakespeare's deepening disenchantment with his world and his dream of that world transfigured. Ryan engages with each comedy as a unique work of dramatic and poetic art, with its own distinctive concerns and critical challenges, paying special attention to its language and form. As the haunting vision shared by the plays emerges from Ryan's acute analysis of each of them, the book transforms our understanding and appreciation of Shakespearean comedy.

Written in a lively, accessible style, Shakespeare's Comedies is essential reading not only for students and teachers, but also for anyone keen to consider these plays from a fresh perspective.

Shortlisted for the ESSE Book Prize for Literatures in the English Language 'I find it impossible to imagine a more brilliant book about Shakespeare's comedies than this one. It's beautifully written, to the extent that one finds oneself as happily lost in its sinuous, musical sentences as in a favourite song or symphony. And its overall argument is convincingly and grippingly developed from the first chapter to the last... Few commentators have written in such accurate yet dazzling prose about Shakespeare since Coleridge told us he wrote Venus and Adonis 'as if he were of another planet'... It's the first great book on its subject of the 21st century.' - Rob Maslen, Senior Lecturer in English, University of Glasgow, UK. "Kiernan Ryan's Shakespeare's Comedies is a delight to read, full of invigorating insights, informed by an acute and sympathetic critical sensibility, and written in a style that is sprightly and persuasive. It is a book that every undergraduate should read ... this is a work of appreciation, at first glance perhaps old-fashioned, but in fact of a kind that could only be written in the critical here and now. I wish I had written this book: I look forward to re-reading it, and to the author's next.' - Professor Russell Jackson, Allardyce Nicoll Chair of Drama, University of Birmingham, UK Praise for Shakespeare by Kiernan Ryan: 'It is impossible to do justice to the compacted richness of Ryan's study...The book is certainly a major contribution to Shakespeare studies' -The Times 'A thrilling polemic' -The Guardian Now in its third edition, published by Palgrave Macmillan.

KIERNAN RYAN is Professor of English Language and Literature at Royal Holloway, University of London, and a Fellow of Murray Edwards College, University of Cambridge, UK. He is the author of Shakespeare (3rd Edition) and the editor of Shakespeare: Texts and Contexts. He is an established reviewer for The Guardian, The Independent and The Times Higher Education Supplement.

Preface.- Killing Time: The Comedy of Errors.- 'A Kind of History': The Taming of the Shrew.- Dancing Leviathans: The Two Gentlemen of Verona.- 'Merry Days of Desolation': Love's Labours Lost'.- The Seventh Man: A Midsummer Night's Dream.- 'The Deed of Kind': The Merchant of Venice.- 'Pribbles and Prabbles': The Merry Wives of Windsor.- 'Strange Misprison': Much Ado About Nothing.- 'Ducdame': As You Like It.- 'Nothing that is so, is so': Twelfth Night.- Works Cited.- Index.

GOR007317430
Shakespeare's Comedies by Kiernan Ryan
Kiernan Ryan
Used - Very Good
Paperback
Palgrave Macmillan
2009-04-21
304
0333599322
9780333599327
Short-listed for ESSE Book Award for Junior Scholars: Literatures in the English Language 2009
Book picture is for illustrative purposes only, actual binding, cover or edition may vary.
This is a used book - there is no escaping the fact it has been read by someone else and it will show signs of wear and previous use. Overall we expect it to be in very good condition, but if you are not entirely satisfied please get in touch with us.