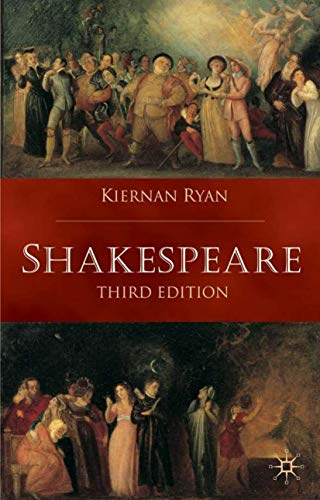 Out of Stock
$27.99
inc. GST
First published in 1989, this 3rd edition, a critical study of Shakespeare, has been revised, updated and expanded with new material, so it is twice the size of the first edition.
Very Good
Only 0 left

First published to critical acclaim in 1989, this book is now recognised as one of the most original and influential critical studies of Shakespeare to have appeared in recent times.
For this brand-new edition, Kiernan Ryan has not only revised and updated the text throughout, but he has also added a great deal of new material, expanding the book to twice the size of the first edition. The section on Shakespearean comedy now includes an essay on Shakespeare's first scintillating experiment in the genre, The Comedy of Errors, and a study of his most perplexing problem play, Measure for Measure.
A provocative new last chapter,' "Dreaming on things to come": Shakespeare and the Future of Criticism', reveals how much modern criticism can learn from the appropriation of Shakespeare by Oscar Wilde, George Bernard Shaw and James Joyce.
Students, teachers, and anyone with a passionate interest in what the plays have to say to us today, will find this modern classic of Shakespeare criticism indispensable.

From reviews of the first edition: 'It is impossible to do justice to the compacted richness of Ryan's Study...The book is certainly a major contribution to Shakespeare studies.' - The Times 'Already acclaimed by leading Shakespearean critics, this book effects a timely reorientation of Shakespeare studies. With insight and accessibility, Ryan argues that literary criticism- both on the left and the right- has worked to fix Shakespeare as a political conservative. The reality, says Ryan, is that Shakespeare constantly pushes towards new dispensations and new liberties, which can be imagined in plays but not yet apprehended. A thrilling polemic.' The Guardian

KIERNAN RYAN is a leading Shakespearean critic with an international reputation. He is Professor of English at Royal Holloway and a Fellow of New Hall, Cambridge.

GOR003125784
Shakespeare: Third Edition by Kiernan Ryan
Kiernan Ryan
Used - Very Good
Paperback
Macmillan Education UK
2001-11-07
256
0333781988
9780333781982
N/A
Book picture is for illustrative purposes only, actual binding, cover or edition may vary.
This is a used book - there is no escaping the fact it has been read by someone else and it will show signs of wear and previous use. Overall we expect it to be in very good condition, but if you are not entirely satisfied please get in touch with us.