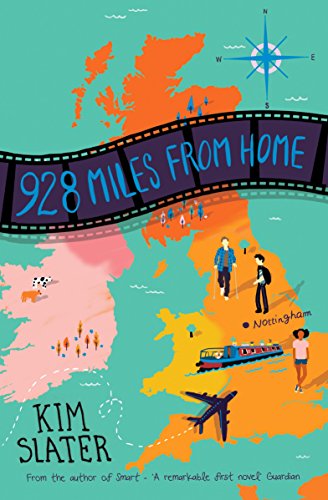 928 Miles from Home by Kim Slater

A brilliant new novel from the the multi-award-winning author of Smart and A Seven-Letter Word, Kim Slater

928 Miles from Home by Kim Slater

Fourteen-year-old Calum Brooks has big dreams. One day he'll escape this boring life and write movies -proper ones, with massive budgets and A-list stars. For now, though, he's stuck coping alone while his dad works away, writing scripts in his head and trying to stay 'in' with his gang of mates at school, who don't like new kids, especially foreign ones.

But when his father invites his new Polish girlfriend and her son, Sergei, to move in, Calum's life is turned upside down. He's actually sharing a room with 'the enemy'! How's he going to explain that to his mates? Yet when Calum is knocked down in a hit-and-run and breaks both legs, everything changes.

Trapped at home, Calum and Sergei slowly start to understand each other, and even work together to investigate a series of break-ins at the local community centre. But Calum can't help feeling that Sergei's hiding something. Is he really trying to help, or to cover up his own involvement in the crime?

928 Miles from Home is a powerful new story from the multi-award-winning author of Smart and A Seven-Letter Word, Kim Slater.

Kim Slater honed her storytelling skills as a child, writing macabre tales specially designed to scare her younger brother! Taking her literary inspiration from everyday life, Kim's debut novel, Smart, has won ten regional prizes and been shortlisted for over twenty regional and national awards, including the Waterstones Children's Book Prize and the Federation of Children's Book Groups Prize. Smart was also longlisted for the 2015 Carnegie Medal. Kim lives in Nottingham with her husband and has one grown-up daughter.

GOR011137288
928 Miles from Home by Kim Slater
Kim Slater
Used - Like New
Hardback
Pan Macmillan
2017-05-18
336
1509842195
9781509842193
N/A
Book picture is for illustrative purposes only, actual binding, cover or edition may vary.
The book has been read, but looks new. The book cover has no visible wear, and the dust jacket is included if applicable. No missing or damaged pages, no tears, possible very minimal creasing, no underlining or highlighting of text, and no writing in the margins
Trustpilot