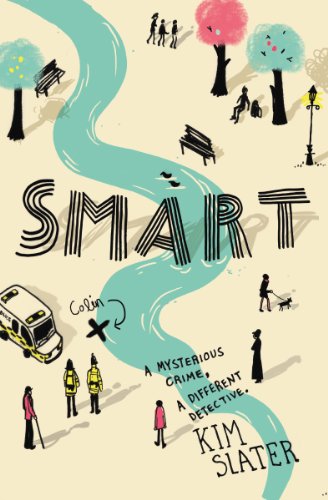 Used Price
$35.99
inc. GST
Free Shipping in Australia
An evocative and compelling debut for fans of The Curious Incident of the Dog in the Night-time
Reviews:
Trustpilot
Very Good Well Read

Smart: A mysterious crime, a different detective by Kim Slater

Shortlisted for the Waterstones Children's Book Prize and nominated for the 2015 Carnegie Medal, Kim Slater's outstanding debut, Smart, is moving and compelling novel with a loveable character at its heart.

'I found Jean's friend dead in the river. His name was Colin Kirk. He was a homeless man, but he still wanted to live.'

There's been a murder, but the police don't care. It was only a homeless old man after all.

Kieran cares. He's made a promise, and when you say something out loud, that means you're going to do it, for real. He's going to find out what really happened. To Colin. And to his grandma, who just stopped coming round one day. It's a good job Kieran's a master of observation, and knows all the detective tricks of the trade.

But being a detective is difficult when you're Kieran Woods. When you're amazing at drawing but terrible at fitting in. And when there are dangerous secrets everywhere, not just outside, but under your own roof.

It's painful to see how Kieran is treated, but heart-warming when people realise what he is capable of and how he doesn't hold the prejudices against other people as most of us might do. Smart leaves you with the hope that this realisation will extend beyond Kieran and will soon become a part of everyday life transatlanticbibliophilia.blogspot.co.uk Altogether this is an amazing, enthralling and enticing debut. Amadillo Magazine This is a book that will make you more aware of others' needs, and to pay attention to life because you never know when you'll have information or skills that can help someone else. nayusreadingcorner.blogspot.co.uk The style of writing is pure genius. -- Guardain Peer Review theguardian.com For me this book is all about the things that go unsaid. overflowinglibrary.com Kieran is very brave, in fact he is the bravest of everyone in the whole story, even though he is the one with special needs and does not fully understand the way people work. He is also smart -he knows how to make use of his talents, he knows when something is wrong and he tells the right people. Good always overcomes evil. scribblesbookreviews.blogspot.co.uk Kim was a guest on the Wondrous Reads blog on Friday, talking about the influence of Art on Smart. It was a very interesting article, touching on Lowry and how his art reflected the changes in his life and well worth a read! wondrousreads.com Smart is a fearless debut from Kim Slater that is written with great care and beauty. There are also a lot of tough topics covered with great sensitivity. Smart is funny, chilling, moving, emotional and also hard to read at times because of Kieran's suffering. fictionfascination.blogspot.co.uk I think fans of thoughtful contemporaries will be really impressed by this debut. I'm definitely looking forward to reading more from Kim Slater! thebookbag.co.uk I enjoyed reading this book and have already started to bug people I know to read it. rachelsweirdness.blogspot.co.uk Smart is quite dark in places, as a result of some of the themes it explores... However, in my opinion Kim Slater covers every one of these themes with sensitivity and uses them to craft a heartwarming tale that could have readers laughing and crying in equal measure. bookzone4boys.blogspot.com Smart is a coming-of-age detective novel with a difference... it's a lovely book with an even lovelier character in Kieran, who in turn has a great voice that will reach a lot of people. Kim Slater is an author to watch - do yourself a favour and remember her name. wondrousreads.com

Kim Slater honed her storytelling skills as a child, writing macabre tales specially designed to scare her younger brother! A self-employed education-budget manager across several Nottinghamshire inner-city schools, she gained a first-class honours degree in English and Creative Writing from Nottingham Trent University at the age of forty and went on to pursue a MA in Creative Writing. Taking her literary inspiration from everyday life, Kim's debut novel, Smart, brings a brilliant new voice to the world of children's books. Kim lives in Nottingham with her partner and has one grown-up daughter.

GOR005772699
Smart: A mysterious crime, a different detective by Kim Slater
Kim Slater
Used - Very Good
Hardback
Pan Macmillan
2014-06-05
240
1447254090
9781447254096
Long-listed for The CILIP Carnegie Medal 2015 (UK)
Book picture is for illustrative purposes only, actual binding, cover or edition may vary.
This is a used book - there is no escaping the fact it has been read by someone else and it will show signs of wear and previous use. Overall we expect it to be in very good condition, but if you are not entirely satisfied please get in touch with us.