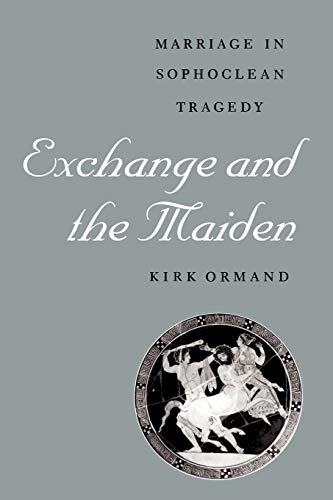 Exchange and the Maiden by Kirk Ormand

Presents insights into how Athenians thought about the institution of marriage, gleaned from the plays of Sophocles.

Exchange and the Maiden: Marriage in Sophoclean Tragedy by Kirk Ormand

Marriage is a central concern in five of the seven extant plays of the Greek tragedian Sophocles. In this pathfinding study, Kirk Ormand delves into the ways in which these plays represent and problematize marriage, thus offering insights into how Athenians thought about the institution of marriage.

Ormand takes a two-fold approach. He first explores the legal and economic underpinnings of Athenian marriage, an institution designed to guarantee the legitimate continuation of patrilineal households. He then shows how Sophocles' plays Trachiniae, Electra, Antigone, Ajax, and Oedipus Tyrannus both reinforce and critique this ideology by representing marriage as a homosocial exchange between men, in which women are objects who may attempt-but always fail-to become self-acting subjects.

These fresh readings provide the first systematic study of marriage in Sophocles. They draw important connections between drama and marriage as rituals concerned with controlling potentially disruptive female subjectivities.

Kirk Ormand is a professor of classics at Oberlin College. His books include Exchange and the Maiden: Marriage in Sophoclean Tragedy and Ancient Sex: New Essays.
GOR006008271
Exchange and the Maiden: Marriage in Sophoclean Tragedy by Kirk Ormand
Kirk Ormand
Used - Very Good
Paperback
University of Texas Press
1998-11-30
231
0292760523
9780292760523
N/A
Book picture is for illustrative purposes only, actual binding, cover or edition may vary.
This is a used book - there is no escaping the fact it has been read by someone else and it will show signs of wear and previous use. Overall we expect it to be in very good condition, but if you are not entirely satisfied please get in touch with us.
Trustpilot