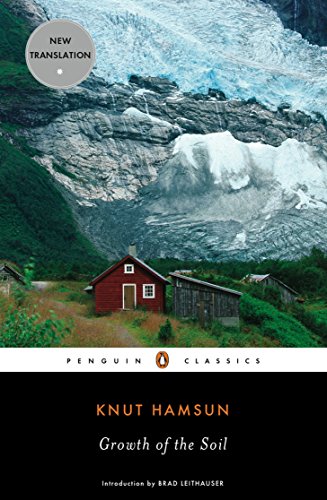 Growth of the Soil
by Knut Hamsun

Growth of the Soil Summary

Growth of the Soil by Knut Hamsun

The epic novel of man and nature that won its author the Nobel Prize in Literature. When it was first published in 1917, Growth of the Soil was immediately recognized as a masterpiece. In the story of Isak, who leaves his village to clear a homestead and raise a family amid the untilled tracts of the Norwegian backcountry, Knut Hamsun evokes the elemental bond between humans and the land. Newly translated by the distinguished Hamsun scholar Sverre Lyngstad, Growth of the Soil is a work of preternatural calm, stern beauty, and biblical power - and the crowning achievement of one of the greatest writers of the twentieth century.

Customer Reviews - Growth of the Soil

Growth of the Soil Reviews

"Knut Hamsun's writing is magical, his sentences are glowing, he could write about anything and make it alive." --Karl Ove Knausgaard, The New York Times Book Review

"Growth of the Soil was a worldwide sensation . . . and almost from the day of publication there were rumors that Hamsun would win the Nobel Prize. . . . Singer admitted to being 'hypnotized' by him; Hesse called him his favorite writer; Hemingway recommended his novels to Scott Fitzgerald; Gide compared him to Dostoyevsky, but believed Hamsun was 'perhaps even more subtle.' The list of those who loved his sly, anarchic voice is long." --The New Yorker

"Growth of the Soil impresses me as among the very greatest novels I have ever read. It is wholly beautiful; it is saturated with wisdom and humor and tenderness." --H. G. Wells

"The whole modern school of fiction in the twentieth century stems from Hamsun." --Isaac Bashevis Singer

Knut Hamsun (1858-1952) was a Norwegian novelist, poet, and playwright hailed by many as one of the founders of modern literature. Born to a poor peasant family in central Norway, he worked as a schoolmaster, sheriff's assistant, laborer, store clerk, farmhand, and streetcar conductor in both Scandinavia and America before establishing himself as a successful playwright and novelist. His first novel, Hunger (1890), was an immediate critical success; he went on to write the novels Mysteries (1892), Pan (1894), Victoria (1898), and The Growth of the Soil (1917), the last of which earned him the Nobel Prize in Literature in 1920.

Sverre Lyngstad (1922-2011; translator, introducer, notes) was a scholar and translator of Norwegian literature and Distinguished Professor Emeritus of English and Comparative Literature at the New Jersey Institute of Technology. He translated five of Knut Hamsun's works for Penguin Classics--Hunger (1890), Mysteries (1892), Pan (1894), Victoria (1898), and The Growth of the Soil (1917)--and was honored by the King of Norway with the St. Olav Medal and with the Knight's Cross, First Class, of the Royal Norwegian Order of Merit.

Brad Leithauser (introducer) is the author of several novels, four volumes of poetry, and a collection of essays. He is the Emily Dickinson Lecturer in the Humanities at Mount Holyoke College.