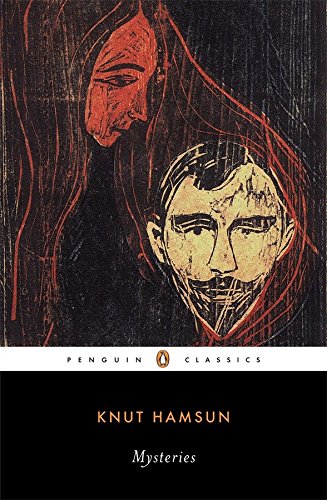 Mysteries is the story of Johan Nilsen Nagel, a mysterious stranger who suddenly turns up in a small Norwegian town one summer--and just as suddenly disappears. Nagel is a complete outsider, a sort of modern Christ treated in a spirit of near parody. He condemns the politics and thought of the age, brings comfort to the "insulted and injured," and gains the love of two women suggestive of the biblical Mary and Martha. But there is a sinister side of him: in his vest he carries a vial of prussic acid...

The novel creates a powerful sense of Nagel's stream of thought, as he increasingly withdraws into the torture chamber of his own subconscious psyche.

For more than seventy years, Penguin has been the leading publisher of classic literature in the English-speaking world. With more than 1,800 titles, Penguin Classics represents a global bookshelf of the best works throughout history and across genres and disciplines. Readers trust the series to provide authoritative texts enhanced by introductions and notes by distinguished scholars and contemporary authors, as well as up-to-date translations by award-winning translators.

"Knut Hamsun's writing is magical, his sentences are glowing, he could write about anything and make it alive." --Karl Ove Knausgaard, The New York Times Book Review

"This is no museum piece redolent with the dust of literary respectability. It is as immediate and haunting as last night's dreams or nightmares." --The New York Times

Knut Hamsun (1858-1952) was a Norwegian novelist, poet, and playwright hailed by many as one of the founders of modern literature. Born to a poor peasant family in central Norway, he worked as a schoolmaster, sheriff's assistant, laborer, store clerk, farmhand, and streetcar conductor in both Scandinavia and America before establishing himself as a successful playwright and novelist. His first novel, Hunger (1890), was an immediate critical success; he went on to write the novels Mysteries (1892), Pan (1894), Victoria (1898), and The Growth of the Soil (1917), the last of which earned him the Nobel Prize in Literature in 1920.

Sverre Lyngstad (1922-2011; translator, introducer, notes) was a scholar and translator of Norwegian literature and Distinguished Professor Emeritus of English and Comparative Literature at the New Jersey Institute of Technology. He translated five of Knut Hamsun's works for Penguin Classics--Hunger (1890), Mysteries (1892), Pan (1894), Victoria (1898), and The Growth of the Soil (1917)--and was honored by the King of Norway with the St. Olav Medal and with the Knight's Cross, First Class, of the Royal Norwegian Order of Merit.

GOR002514739
Mysteries by Knut Hamsun
Knut Hamsun
Penguin twentieth-century classics
Used - Very Good
Paperback
Penguin Group (NZ)
2001-01-25
313
0141186186
9780141186184
N/A
Book picture is for illustrative purposes only, actual binding, cover or edition may vary.
This is a used book - there is no escaping the fact it has been read by someone else and it will show signs of wear and previous use. Overall we expect it to be in very good condition, but if you are not entirely satisfied please get in touch with us.