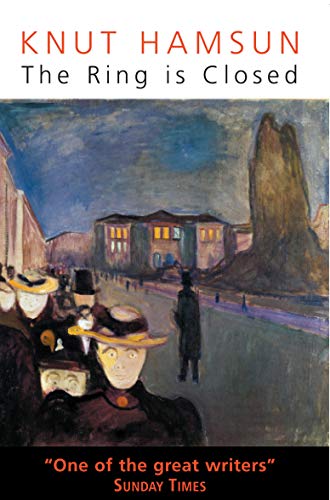 The Ring is Closed
by Knut Hamsun

The Ring is Closed Summary

The Ring is Closed by Knut Hamsun

The Ring is Closed combines a central character as iconoclastic as that of Hunger with an evocation of the limitations of small-town life to equal Mysteries. Abel is the only son of a miserly lighthouse-keeper, after falling in love he leaves his life in a village in southern Norway and travels around the United States. He returns home, haunted by secret crimes, and now his only ambition is to live, on the barest of necessities, without desire or ambition. Abel allows all opportunities for another life - an inheritance, employment, relationships - to slip away while Hamsun questions what is the true meaning of work and life.

Customer Reviews - The Ring is Closed

The Ring is Closed Reviews

Thanks to Souvenir, readers can now reclaim extraordinary works such as the eerie Mysteries and the epic Growth of the Soil... an unsettling master of modern fiction. -- The Independent
A rare understanding of human nature comes through, expressed in a measured, elegiac and lyrical prose. The atmosphere is deliciously thick with sensuality and doom. -- Sunday Telegraph
Hamsun is one of the great writers of this century - his nearest British equivalent being I suspect Thomas Hardy. Hamsun's novels have the simplicity of total self-possession, of the clearest possible understanding of the human world... a unique beauty of expression. -- Sunday Times
The most outstanding Norwegian writer since Ibsen. -- Times Literary Supplement

Born in 1859, Knut Hamsun's early works were forceful and polemic before he became more compassionate in his later work, drawing inspiration from the country people of his native Norway. He was awarded the Nobel Prize for Literature in 1920 for Growth of the Soil. He has been recognised as one of the greatest literary figures of the twentieth century.

GOR002278895
The Ring is Closed by Knut Hamsun
Knut Hamsun
Used - Very Good
Paperback
Profile Books Ltd
2010-04-30
336
0285638688
9780285638686
N/A
Book picture is for illustrative purposes only, actual binding, cover or edition may vary.
This is a used book - there is no escaping the fact it has been read by someone else and it will show signs of wear and previous use. Overall we expect it to be in very good condition, but if you are not entirely satisfied please get in touch with us.