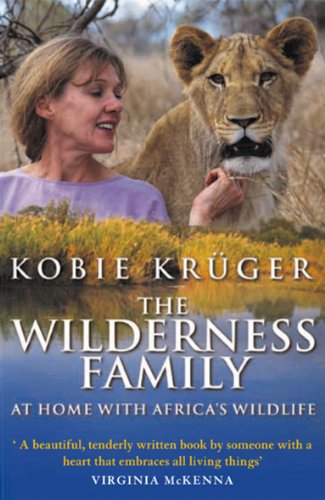 The Wilderness Family
by Kobie Kruger

In Stock
$13.99
+10% GST
When Kobie Kruger, her game-ranger husband and their three young daughters moved to one of the most isolated corners of the world - a remote ranger station in the Mahlangeni region of South Africa's vast Kruger National Park - she might have worried that she would become engulfed with loneliness and boredom.
Very Good Good Well Read
Only 3 left

The Wilderness Family by Kobie Kruger

When Kobie Kruger, her game-ranger husband and their three young daughters moved to one of the most isolated corners of the world - a remote ranger station in the Mahlangeni region of South Africa's vast Kruger National Park - she might have worried that she would become engulfed with loneliness and boredom. Yet, for Kobie and her family, the seventeen years spent in this spectacularly beautiful park proved to be the most magical - and occasionally the most hair-raising - of their lives. Kobie recounts their enchanting adventures and extraordinary experiences in this vast reserve - a place where, bathed in golden sunlight, hippos basked in the glittering waters of the Letaba River, storks and herons perched along the shoreline, and fruit bats hung in the sausage trees. But as the Krugers settled in, they discovered that not all was peace and harmony. They soon became accustomed to living with the unexpected: the sneaky hyenas who stole blankets and cooking pots, the sinister-looking pythons that slithered into the house, and the usually placid elephants who grew foul-tempered in the violent heat of the summer. And one terrible day, a lion attacked Kobus in the bush and nearly killed him. Yet nothing prepared the Krugers for their greatest adventure of all, the raising of an orphaned prince, a lion cub who, when they found him, was only a few days old and on the verge of death. Reared on a cocktail of love and bottles of fat-enriched milk, Leo soon became an affectionate, rambunctious and adored member of the fmaily. It is the rearing of this young king, and the hilarious endeavours to teach him to become a 'real' lion who could survive with his own kind in the wild, that lie at the heart of this endearing memoir. It is a memoir of a magical place and time that can never be recaptured.

"A beautiful, tenderly written book by someone with a heart that embraces all living things" -- Virginia McKenna
"There are some nail-biting encounters in the bush, and myriad touching tales" * Choice *
"An exquisite book" * Daily Express *

Kobie Kruger was born on a farm in the Northern Province bushlands of South Africa. She met her husband, Kobus, at the University of Pretoria and they lived in Namibia and Johannesburg before moving to the Kruger National Park in 1980. The Wilderness Family was published as two volumes in South Africa - both were number one bestsellers. She has also published Buro van Babel and Boskonsert, nominated for an AKTV Prose Prize in 1992, and made two documentary films in the Kruger National Park which were screened on national television in South Africa. She now lives at Paradise Beach in the Eastern Cape with her husband and youngest daughter.

GOR001403796
The Wilderness Family by Kobie Kruger
Kobie Kruger
Used - Very Good
Paperback
Transworld Publishers Ltd
2002-01-01
400
055381334X
9780553813340
N/A
Book picture is for illustrative purposes only, actual binding, cover or edition may vary.
This is a used book - there is no escaping the fact it has been read by someone else and it will show signs of wear and previous use. Overall we expect it to be in very good condition, but if you are not entirely satisfied please get in touch with us.