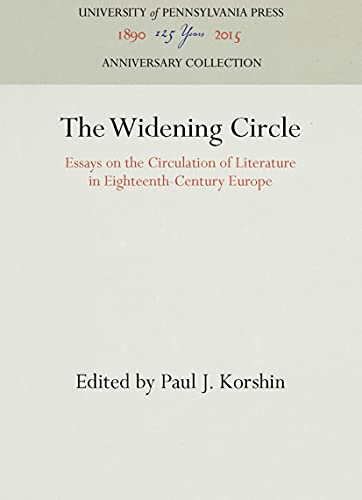 Three distinguished authorities--Robert Darnton, Roy M. Wiles, and Bernhard Fabian--here offer informed reflections on the history of books, on literary commerce, and on the reading public in eighteenth-century England, France, and Germany.

Three distinguished authorities offer informed reflections on the history of books, on literary commerce, and on the reading public in eighteenth-century England, France, and Germany. Concerned with an area of study that has gone largely unexplored--the social function of the book trade and the various agencies of distribution--Robert Darnton. Roy M. Wiles, and Bernhard Fabian lay the groundwork for the intellectual, social, and literary historian as well as the student of political revolutions.

Robert Darnton's rich account of a clandestine book dealer expands our knowledge of the actual habits of eighteenth-century Frenchmen. We learn about the livres philosophiques, as they were known in the trade--obscene. irreligious. or seditious works; about the intricate circuit of agents linking publisher and bookdealer; and about a confidence game often surviving on sheer bravura. Darnton not only gives us a general sense of the literary tastes in a small provincial city in France on the eve of the Revolution but also opens the way toward an understanding of the country's entire literary underground.

The late Roy M. Wiles investigates the principal readership in eighteenth-century England and demonstrates that intellectual activities were not confined to polite society in London. Employing new, often untouched materials--newspaper circulation and delivery figures, book lists and advertisements in London and local papers, subscription books in provincial towns and cities--Wiles helps dispel some of the uncertainty surrounding the question of literacy and shows that, in fact, what the provincial readers chose to read more accurately registers the eighteenth century's relish for reading than those books considered by Londoners as "required" reading.

Bernhard Fabian explores the sources that permit us to assess the circulation of English letters in Germany during the second half of the eighteenth century. By considering the kind of information obtained from subscription lists, by studying the relation of English literature to the general reader of the period, and by examining the emergence of a reading public that actually read English, Fabian helps delineate a broad view of the contemporary reading scene in eighteenth-century Germany.

"Essential reading for specialists in eighteenth-century social and intellectual history. . . . Enjoyable and instructive to anyone interested in books, the fate of reading, and the strange and imperfect agencies by which ideas get around."--Book Forum

Paul J. Korshin was Professor of English at the University of Pennsylvania.

GOR010351112
Widening Circle CB by Korshin
Korshin
Used - Very Good
Hardback
University of Pennsylvania Press
1976-11-01
204
0812277171
9780812277173
N/A
Book picture is for illustrative purposes only, actual binding, cover or edition may vary.
The book has been read but remains in clean condition. All pages are intact and the cover is intact. Some minor wear to the spine.