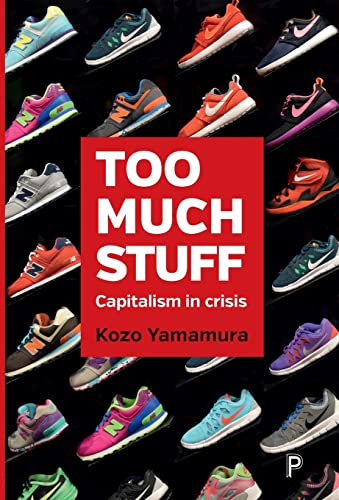 Too much stuff
by Kozo Yamamura

Used Price
$32.99
inc. GST
Free Shipping in Australia
We now enjoy the highest living standard in history yet spend more of our income on pointless luxury. Instead, we should tax more in order to invest much more in societal needs, which will in turn reinvigorate the economy and reduce economic inequality and environmental degradation.
Very Good

Too much stuff Summary

Too much stuff: Capitalism in crisis by Kozo Yamamura

Where has capitalism gone wrong? Why do conventional policy solutions produce only wider income disparity and inequality? We now live in a new world in which we enjoy the highest living standard in history, acquiring ever more goods and services as necessary luxuries. Yet current policies only serve to expand public debt and exacerbate socio-economic inequality. In Too much stuff, Yamamura suggests the only way for capitalism and democracy to thrive is to increase investment to meet societal needs and argues that this will help reduce the growing wealth gap which threatens global democracy. With convincing evidence from across the Western world, this bold book challenges the economic orthodoxy and offers practical steps forward that we can all support.

Too much stuff Reviews

"an accessible and clearly written book for anyone with an interest in economics who is wondering "where next" for government economic policy." Nat O'Connor, Ulster University
"In our world of "necessary luxuries", incorrect investment incentives, disparate and worsening income distribution, this cogent, important, skeptical, provocative analysis proposes what must change in the US, Japan, Germany, and elsewhere." Hugh Patrick, Center on Japanese Economy and Business, Columbia Business School
"A timely and urgent read given that western economies are at a political and environmental tipping point." Ann Pettifor, Policy Research in Macroeconomics
"A bold and heterodox diagnosis of capitalism's illness, and a bracing prescription: It's time for government to invest in basic needs, rather than encouraging us to make and buy growing mounds of junk. We will be talking about this book for years." Walter Hatch, Oak Institute for Human Rights, Colby College
"A compelling argument for a fairer, smarter form of capitalism which prioritises spending on public goods like health, infrastructure, education, and the environment. At a time of sharpening political end economic divides, this book is a must read." Miranda Schreurs, Bavarian School of Public Policy, Technical University of Munich
"This book is right on time: the leading post-WWII economies are losing economic momentum and facing threats to their democratic institutions. Kozo Yamamura demands a prompt systemic change of the capitalist system in order to revitalize growth and secure democracy." Guenter Heiduk, World Economy Research Institute, Warsaw School of Economics

Kozo Yamamura was until recently the Job and Gertrud Tamaki Professor of Asian Studies and Economics at the University of Washington, Seattle. He also worked at universities in the US, Japan, Germany and France. He published or edited 25 books from in the US, UK and Japan, many focused on the Japanese economy and economic history, in addition to several books on Comparative Economic Institutions and Policy.

GOR010026798
Too much stuff: Capitalism in crisis by Kozo Yamamura
Kozo Yamamura
Used - Very Good
Hardback
Policy Press
2017-03-01
224
1447335651
9781447335658
N/A
Book picture is for illustrative purposes only, actual binding, cover or edition may vary.
This is a used book - there is no escaping the fact it has been read by someone else and it will show signs of wear and previous use. Overall we expect it to be in very good condition, but if you are not entirely satisfied please get in touch with us.