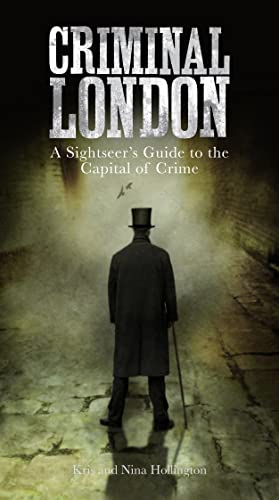 Criminal London features three original walks and over a hundred locations, including: the scenes of infamous murders, watering holes frequented by notorious felons, the homes of great consulting detectives, and locations from London' s rich history of law and order.

Criminal London: A Sightseer's Guide to the Capital of Crime by Kris Hollington

From Sherlock Holmes' Baker Street and Jack the Ripper' s Whitechapel to the East End of the Krays and the white-collar crooks of the City, London has played silent witness to countless crimes both real and imagined. Moreover, in print and on screen the city has exported its criminal heritage to the world, becoming a global capital of wrongdoing rivalled only by New York and Los Angeles. Yet there has never been a guide to its darker points of interest - until now.

Traversing centuries of villainy, Criminal London explores the more scandalous moments of the city' s story. Featured herein are three original walks and over 100 sights to see, including: the scenes of infamous murders, watering holes frequented by notorious felons, the homes of great consulting detectives, and locations from London' s rich history of law and order, such as the Clink, Tyburn Tree and Bow Street Police Station.

Perfect for adventurous tourists and curious Londoners, this is a sightseeing guide for the intrepid.

'Thicker and chewier than a truncheon sandwich...Too many new London guides trot out the same tired old suite of trivia, but the Hollingtons have really done their research, unearthing more nefarious nuggets than you'll find in a Norbury Fried Chicken.' The Londonist

NINA HOLLINGTON is a professional photographer whose work has been published in numerous books and newspapers. She has provided most of the images for Criminal London, except for those buildings which no longer exist, or where photography is forbidden. Kris and Nina are married and live in East London.

GOR005550242
Criminal London: A Sightseer's Guide to the Capital of Crime by Kris Hollington
Kris Hollington
Used - Very Good
Paperback
Aurum Press
2013-03-21
336
1845137787
9781845137786
N/A
Book picture is for illustrative purposes only, actual binding, cover or edition may vary.
This is a used book - there is no escaping the fact it has been read by someone else and it will show signs of wear and previous use. Overall we expect it to be in very good condition, but if you are not entirely satisfied please get in touch with us.