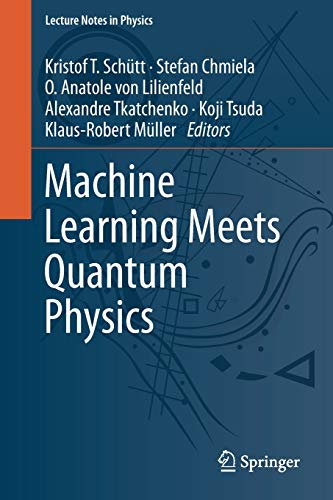 Designing molecules and materials with desired properties is an important prerequisite for advancing technology in our modern societies. This requires both the ability to calculate accurate microscopic properties, such as energies, forces and electrostatic multipoles of specific configurations, as well as efficient sampling of potential energy surfaces to obtain corresponding macroscopic properties. Tools that can provide this are accurate first-principles calculations rooted in quantum mechanics, and statistical mechanics, respectively. Unfortunately, they come at a high computational cost that prohibits calculations for large systems and long time-scales, thus presenting a severe bottleneck both for searching the vast chemical compound space and the stupendously many dynamical configurations that a molecule can assume.

To overcome this challenge, recently there have been increased efforts to accelerate quantum simulations with machine learning (ML). This emerging interdisciplinary community encompasses chemists, material scientists, physicists, mathematicians and computer scientists, joining forces to contribute to the exciting hot topic of progressing machine learning and AI for molecules and materials.

The book that has emerged from a series of workshops provides a snapshot of this rapidly developing field. It contains tutorial material explaining the relevant foundations needed in chemistry, physics as well as machine learning to give an easy starting point for interested readers. In addition, a number of research papers defining the current state-of-the-art are included. The book has five parts (Fundamentals, Incorporating Prior Knowledge, Deep Learning of Atomistic Representations, Atomistic Simulations and Discovery and Design), each prefaced by editorial commentary that puts the respective parts into a broader scientific context.

Kristof T. Schutt studied computer science at the Technische Universitat Berlin where he received the MSc. in 2012 and the Ph.D. degree in 2018.

During his doctoral studies in the machine learning group of TU Berlin and at the Berlin Big Data Center, his research interests has been representation learning of atomistic systems, in particular the development of interpretable neural networks for applications in quantum chemistry.

Dr. Schutt has continued this research in a postdoctoral position at the Berlin Center for Machine Learning.

Stefan Chmiela is a postdoc researcher in the Machine Learning group at Technische Universitat Berlin, where he obtained his Doctor degree in computer science in 2019.
His inter-disciplinary research revolves around developing efficient machine learning methods to approximate the many-body problem, without unraveling its full combinatorial complexity. A particular focus lies on the description of atomic interactions in quantum chemistry, under consideration of the natural invariants that restrict a system's degrees of freedom.

O. Anatole von Lilienfeld is Associate Professor of Physical Chemistry at the University of Basel. Research in his laboratory deals with the development of improved methods for first principles based sampling of chemical compound space using quantum mechanics, super computers, Big Data, and machine learning.

He is editor in chief of the IOP journal "Machine Learning: Science and Technology", has been awarded the Feynman Prize in Nanotechnology, and is an ERC consolidator grantee.

Alexandre Tkatchenko is a Professor of Theoretical Chemical Physics at the University of Luxembourg and Visiting Professor at the Berlin Big Data Center. He obtained his bachelor degree in Computer Science and a Ph.D. in Physical Chemistry at the Universidad Autonoma Metropolitana in Mexico City.

Between 2008 and 2010, he was an Alexander von Humboldt Fellow at the Fritz Haber Institute of the Max Planck Society in Berlin.

Between 2011 and 2016, he led an independent research group at the same institute.

Tkatchenko has given more than 230 plenary/keynote/invited talks, seminars and colloquia worldwide, published more than 150 articles in peer-reviewed academic journals (h-index=57), and serves on the editorial boards of Physical Review Letters (APS) and Science Advances (AAAS).

In 2000-2001, he worked at GMD FIRST (currently Fraunhofer FIRST) in Berlin, Germany, as Visiting Scientist.

In 2003-2004 and 2006-2008, he worked at Max Planck Institute for Biological Cybernetics, Tu bingen, Germany, first as Research Scientist and later as Project Leader.

Currently, he is Professor at Department of Computational Biology and Medical Sciences, Graduate School of Frontier Sciences, the University of Tokyo. He is also affiliated with National Institute of Material Science (NIMS) and RIKEN Center for Advanced Intelligence Project.

Klaus-Robert Muller studied physics in Karlsruhe, Germany, from 1984 to 1989, and received the Ph.D. degree in computer science from Technische Universitat Karlsruhe, Karlsruhe, in 1992. After completing a postdoctoral position at GMD FIRST, Berlin, Germany, he was a Research Fellow with The University of Tokyo, Tokyo, Japan, from 1994 to 1995. In 1995, he founded the Intelligent Data Analysis Group, GMD-FIRST (later Fraunhofer FIRST), and directed it until 2008. From 1999 to 2006, he was a Professor with the University of Potsdam, Potsdam Germany. He has been a Professor of computer science with Technische Universitat Berlin, Berlin, since 2006; at the same time, he is co-directing the Berlin Big Data Center and directing the Berlin Center for Machine Learning.

Dr. Muller was a recipient of the 1999 Olympus Prize by the German Pattern Recognition Society, DAGM, and he received the SEL Alcatel Communication Award in 2006, the Science Prize of Berlin awarded by the Governing Mayor of Berlin in 2014, and the Vodafone Innovation Award in 2017.

NLS9783030402440
9783030402440
3030402444
Machine Learning Meets Quantum Physics by Kristof T. Schutt
Kristof T. Schutt
Lecture Notes in Physics
New
Paperback
Springer Nature Switzerland AG
2020-06-04
467
N/A
Book picture is for illustrative purposes only, actual binding, cover or edition may vary.
This is a new book - be the first to read this copy. With untouched pages and a perfect binding, your brand new copy is ready to be opened for the first time
Trustpilot