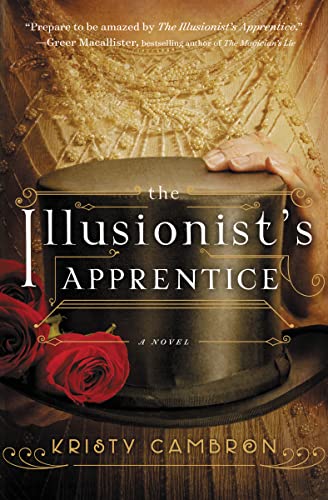 The Illusionist's Apprentice
by Kristy Cambron

In Stock
$12.99
+10% GST
Harry Houdini's one-time apprentice holds fantastic secrets about the greatest illusionist in the world. But someone wants to claim them . . . or silence her before she can reveal them on her own.
Very Good
Only 1 left

The Illusionist's Apprentice by Kristy Cambron

Not all illusions happen on the stage.

escape the pain of her past. She continues her career of illusion after her mentor's death, intent on burying her true identity.

But when a rival performer's act goes tragically wrong, the newly formed FBI calls on Wren to speak the truth-and reveal her real name to the world. She transfers her skills for misdirection from the stage to the back halls of vaudeville, as she finds herself the unlikely partner in the FBI's investigation. All the while Houdini's words echo in her mind: Whatever occurs, the crowd must believe it's what you meant to happen. She knows that if anyone digs too deep, secrets long kept hidden may find their way to the surface-and shatter her carefully controlled world.

Set during one of the richest, most vibrant eras in American history, this Jazz Age novel of illusion, suspense, and forgotten pasts is perfect for fans of The Magician's Lie, challenging all to find the underpinnings of faith on their own life's stage.

"Prepare to be amazed by The Illusionist's Apprentice." -Greer Macallister, bestselling author of The Magician's Lie and Girl in Disguise

'Cambron takes readers on an amazing journey into the world of vaudeville illusionists during the Roaring Twenties. This novel includes an intriguing mystery that adds adventure and suspense to the intricately detailed historical drama . . . The romance is wonderfully portrayed as well, rounding out the story with tenderness.' * -RT Book Reviews 4 1/2 stars TOP PICK! *
"Cambron's lithe prose pulls together past and present and her attention to historical detail grounds the narrative to the last breathtaking moments." * -Publishers Weekly, starred review *
"Cambron (The Ringmaster's Wife) has written a gripping tale of suspense that will please her growing fan base." * Library Journal *

KRISTY CAMBRON is an award-winning author of historical fiction, including her bestselling debut The Butterfly and the Violin, and an author of Bible studies, including the Verse Mapping series. She's a Women's Ministry Leader at Southeast Christian Church in Louisville, KY, and a passionate storyteller who travels to speak at events across the country, encouraging women to experience a deeper life in the Word through verse mapping. Her work has been named to Publishers Weekly Religion & Spirituality TOP 10, Library Journal Reviews' Best Books, RT Reviewers' Choice Awards, and received 2015 & 2017 INSPY Award nominations. Kristy holds a degree in Art History/Research Writing, and has 15 years of experience in education and leadership development for a Fortune-100 Corporation, working with such companies as the Disney Institute, IBM/Kenexa, and Gallup. She lives in Indiana with her husband and three sons, and can probably be bribed with a coconut mocha latte and a good read. Facebook: @KCambronAuthor Twitter: @KCambronAuthor Instagram: kristycambron Pinterest: Kristy Cambron Website: kristycambron.com

GOR010083459
The Illusionist's Apprentice by Kristy Cambron
Kristy Cambron
Used - Very Good
Paperback
Thomas Nelson Publishers
2017-04-06
368
071804150X
9780718041502
N/A
Book picture is for illustrative purposes only, actual binding, cover or edition may vary.
This is a used book - there is no escaping the fact it has been read by someone else and it will show signs of wear and previous use. Overall we expect it to be in very good condition, but if you are not entirely satisfied please get in touch with us.