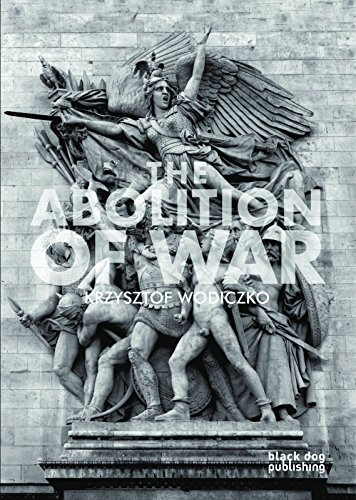 Abolition of War
by Krzysztof Wodiczko

In Stock
$33.99
inc. GST
An intriguing insight into the working practice of this Krzysztof Wodiczko and the political and social concepts infused throughout his work. With an extended essay by Wodiczko as the starting point for discussions on war and war-related history and memory, the book is further supported by texts from theorists and critics in the field.
Like New Very Good
Only 1 left

Abolition of War by Krzysztof Wodiczko

The Abolition of War explores the ideas that inform Krzysztof Wodiczko's project The World Institute for the Abolition of War and is a manifesto for the dismantling of what Wodiczko sees as the ubiquitous, unconscious, and ultimately perilous "Culture of War," which is embedded within and constantly reaffirmed by our monuments and our historical narratives. In this volume Wodiczko, winner of the Hiroshima Art Prize in 1998, offers a detailed examination of his proposal for The World Institute for the Abolition of War, a projected "Un-War Memorial" constructed as a structure encapsulating the existing Arc de Triomphe in Paris.
Wodiczko is joined by anthropologist Douglas Fry to shed light on the silent but deeply rooted ideologies of war, which permeate our contemporary societies, fuelling current acts of aggression and threatening to erupt into further warfare. Fry's essay "Abolition of War: An Agenda for Survival" contradicts the generally held assumption that war is an inevitable aspect of human life, and posits new models of global interdependency as the necessary step towards viable peace.

"The call to do away with war once and for all is generally thought to be naive and overly idealistic. But this skepticism has not deterred Krzysztof Wodiczko, whose new proposal "Arc de Triomphe: World Institute for the Abolition of War" takes up the challenge in an extraordinary way." Art in America Magazine

Krzysztof Wodiczko was born in 1943 in Warsaw, Poland and is currently Professor in Residence of Art, Design, and the Public Domain at the Harvard University Graduate School of Design. Wodiczko has realised more than 70 public projections in Australia, Austria, Canada, England, Germany, Holland, Ireland, Israel, Italy, Mexico, Poland, Spain, Switzerland, and the United States. He participated in the Cold War Modern (V&A) and the Sleeping and Dreaming (Wellcome Trust) exhibitions in London in 2008. He was awarded the Hiroshima Prize in 1998 for his contribution as an artist to world peace. He has previously published Krzysztof Wodiczko and The City of Refuge with Black Dog Publishing.
He lives in Massachusetts, USA

GOR010337087
Abolition of War by Krzysztof Wodiczko
Krzysztof Wodiczko
Used - Like New
Paperback
Blackdog Press
2012-04-19
144
190731766X
9781907317668
N/A
Book picture is for illustrative purposes only, actual binding, cover or edition may vary.
This is a used book - there is no escaping the fact it has been read by someone else and it will show signs of wear and previous use. Overall we expect it to be in very good condition, but if you are not entirely satisfied please get in touch with us.