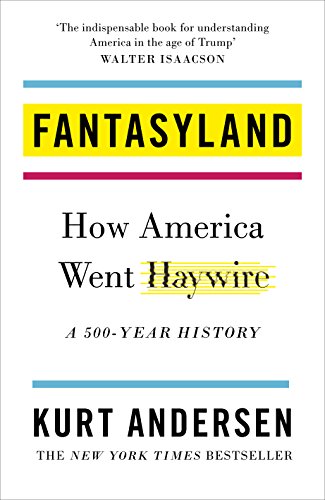 Used Price
$42.99
inc. GST
Free Shipping in Australia
That do-your-own-thing freedom - run amok since the individualism and relativism of the 1960s and later the unprecedented free-for-all world of the Internet, is the driving credo of America's current transformation where the difference between opinion and fact is rapidly crumbling.
Reviews:
Trustpilot
Very Good

Help your Dad win his next dinner table debate this Father's day with Fantasyland. You don't have to be mad to live here, but it helps If you want to understand Trump's America, how the lines between reality and illusion have become dangerously blurred, you have to go back to the very beginning and take a dizzying road trip across five centuries of crackpot delusion and make-believe from Salem to Scientology. From the Pilgrim Fathers onward, America has been a place where renegades and freaks came in search of freedom to create their own realities with little objectively regulated truth standing in their way. To invent and believe what the hell you like is in some ways an unwritten constitutional right. Every citizen is more than ever gloriously free to construct and promote any vision of the world he or she devoutly believes to be true. That do-your-own-thing freedom - run amok since the individualism and relativism of the 1960s and later the unprecedented free-for-all world of the Internet, is the driving credo of America's current transformation where the difference between opinion and fact is rapidly crumbling. Fantasyland is a journey that joins the dots between the disparate crazed franchises of true believers - America's endless homespun rebooting of Christianity from Mormons to charismatics, medicine shows to new age quacks, conspiracy theorists of every stripe, showmen hucksters from P T Barnum to Trump himself, Creationists to climate change deniers, extra-terrestrial obsessives to gun-toting libertarians, anti-Government paranoia, pseudoscience, survivalists and satanic panic. Along the way Kurt Andersen has created a unique and raucous history of America and a new paradigm for understanding our post-factual world.

"Not only a must-read for anyone wanting to understand Trump's America but also a laugh-out-loud undiluted pleasure" -- Will Storr, author of Selfie
"This is an important book - the indispensable book - for understanding America in the age of Trump. It's an eye-opening history filled with brilliant insights, a saga of how we were always susceptible to fantasy, from the Puritan fanatics to the talk-radio and Internet wackos who mix show business, hucksterism, and conspiracy theories." -- Walter Isaacson, author of Steve Jobs
"Fantasyland presents the very best kind of idea - one that, in retrospect, seems obvious, but which took a seer like Kurt Andersen to piece together. The thinking and the writing are both dazzling; it is at once a history lesson and an oh-so-modern cri de coeur; it's an absolute joy to read, and will leave your brain dancing with excitement long after you're done" -- Stephen Dubner, co-author of Freakonomics
"An absorbing, must-read polemic." * Newsday *
"The most important book that I have read this year." -- Lawrence O'Donnell * The Last Word, MSNBC *
"I've never read a history book that is as insightful and at the same time as funny as this one." -- Steven Johnson
"This is a blockbuster of a book. Kurt Andersen is a dazzling writer and a perceptive student of the many layers of American life. Take a deep breath and dive in." -- Tom Brokaw
"Riveting...hugely entertaining." -- Francis Wheen * Mail on Sunday *
"Charged with enough anger and wit to become necessary reading." * Observer *

New York Times bestselling author Kurt Andersen is host and co-creator of Studio 360, the Peabody Award-winning public radio show and podcast. He co-founded Spy magazine, served as editor-in-chief of New York Magazine, and was a cultural columnist and critic for Time and the New Yorker and contributes to Vanity Fair and the New York Times. Read more about him at his website: http://www.kurtandersen.com/

GOR008702876
Fantasyland: How America Went Haywire: A 500-Year History by Kurt Andersen
Kurt Andersen
Used - Very Good
Hardback
Ebury Publishing
2017-10-12
480
1785038656
9781785038655
N/A
Book picture is for illustrative purposes only, actual binding, cover or edition may vary.
This is a used book - there is no escaping the fact it has been read by someone else and it will show signs of wear and previous use. Overall we expect it to be in very good condition, but if you are not entirely satisfied please get in touch with us.