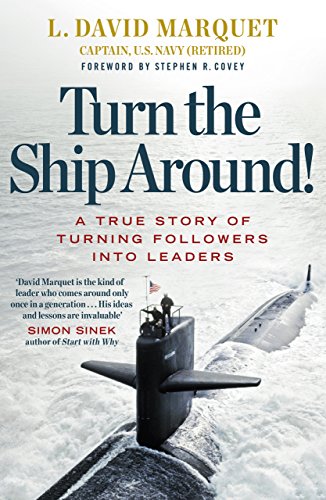 Turn The Ship Around!
by L. David Marquet

In Stock
$23.49
inc. GST
No matter your business or position, this book shows you how to apply the author's approach to create a workplace where everyone takes responsibility for their actions, people are healthier and happier - and everyone is a leader.
Very Good
Only 4 left

Turn The Ship Around! Summary

Turn The Ship Around!: A True Story of Building Leaders by Breaking the Rules by L. David Marquet

'David Marquet is the kind of leader who comes around only once in a generation ... his ideas and lessons are invaluable' Simon Sinek, author of Start With Why

Captain David Marquet was used to giving orders. In the high-stress environment of the USS Santa Fe, a nuclear-powered submarine, it was crucial his men did their job well. But the ship was dogged by poor morale, poor performance and the worst retention in the fleet.

One day, Marquet unknowingly gave an impossible order, and his crew tried to follow it anyway. He realized he was leading in a culture of followers, and they were all in danger unless they fundamentally changed the way they did things.

Marquet took matters into his own hands and pushed for leadership at every level. Before long, his crew became fully engaged and the Santa Fe skyrocketed from worst to first in the fleet.

No matter your business or position, you can apply Marquet's approach to create a workplace where everyone takes responsibility for their actions, people are healthier and happier - and everyone is a leader.

In his latest book, Leadership is Language, Marquet builds on what he teaches in Turn the Ship Around!, showing us how to lead our teams to success through the language that we use.

Turn The Ship Around! Reviews

I don't know of a finer model of this kind of empowering leadership than Captain Marquet. And in the pages that follow you will find a model for your pathway * Stephen R. Covey, author of The 7 Habits of Highly Effective People *
To say I'm a fan of David Marquet would be an understatement . . . I'm a fully fledged groupie. He is the kind of leader who comes around only once a generation. He is the kind of leader who doesn't just know how to lead, he knows how to build leaders. His ideas and lessons are invaluable to anyone who wants to build an organization that will outlive them * Simon Sinek, optimist and author of Start with Why *

L. David Marquet, a top graduate of the US Naval Academy, commanded the nuclear-powered, fast-attack submarine USS Santa Fe from 1999 to 2001, transforming it from the worst-performing submarine in its fleet to the best. Since retiring from the navy, Marquet has worked with businesses nationwide as a leadership consultant. He gives presentations around the world about his acclaimed first book, Turn the Ship Around: A True Story of Turning Followers into Leaders.

GOR007553117
Turn The Ship Around!: A True Story of Building Leaders by Breaking the Rules by L. David Marquet
L. David Marquet
Used - Very Good
Paperback
Penguin Books Ltd
2015-10-08
272
0241250943
9780241250945
N/A
Book picture is for illustrative purposes only, actual binding, cover or edition may vary.
This is a used book - there is no escaping the fact it has been read by someone else and it will show signs of wear and previous use. Overall we expect it to be in very good condition, but if you are not entirely satisfied please get in touch with us.