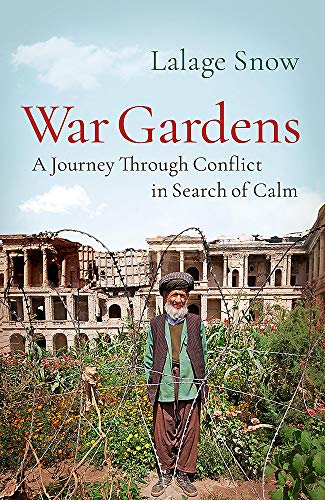 Used Price
$23.49
inc. GST
Free Shipping in Australia
A journey through the most unlikely of gardens: the oases of peace people create in the midst of war
Very Good

War Gardens: A Journey Through Conflict in Search of Calm by Lalage Snow

A journey through the most unlikely of gardens: the oases of peace people create in the midst of war

In this millennium, we have become war weary. From Afghanistan to Iraq, from Ukraine to South Sudan and Syria, from Kashmir to the West Bank, conflict is as contagious and poisonous as Japanese knotweed. Living through it are people just like us with ordinary jobs, ordinary pressures and ordinary lives. Against a new landscape of horror and violence it is up to them to maintain a modicum of normality and colour. For some, gardening is the way to achieve this.

Working in the world's most dangerous war zones, freelance war correspondent and photographer Lally Snow has often chanced across a very moving sight, a testimony to the triumph of the human spirit in adversity, a celebration of hope and beauty: a war garden. In Kabul, the royal gardens are tended by a centenarian gardener, though the king is long gone; in Camp Bastion, bored soldiers improvise tiny gardens to give themselves a moment's peace; on both sides of the dividing line in Jerusalem families tend groves of olives and raise beautiful plants from the unforgiving, disputed landscape; in Ukraine, families tend their gardens in the middle of a surreal, frozen war.

War Gardens is a surprising, tragic and beautiful journey through the darkest places of the modern world, revealing the ways people make time and space for themselves and for nature even in the middle of destruction. Illustrated with Lally Snow's own award-winning photography, this is a book to treasure.

Award winning photographer, filmmaker and writer Lalage Snow has covered conflict and unrest since 2007 after finishing a Masters degree with Distinction in photojournalism at London College of Communication. Her personal projects have been published and exhibited to critical acclaim around the world and have been featured on the Channel 4, BBC, CNN and Al Jazeera. She has also given a number of public talks at literary festivals, museums and academic institutions including MIT. A series of short films made in Afghanistan are currently on display at the Smithsonian, the worlds largest museum complex.

GOR009843415
War Gardens: A Journey Through Conflict in Search of Calm by Lalage Snow
Lalage Snow
Used - Very Good
Paperback
Quercus Publishing
2019-05-28
352
1787470717
9781787470712
N/A
Book picture is for illustrative purposes only, actual binding, cover or edition may vary.
This is a used book - there is no escaping the fact it has been read by someone else and it will show signs of wear and previous use. Overall we expect it to be in very good condition, but if you are not entirely satisfied please get in touch with us.