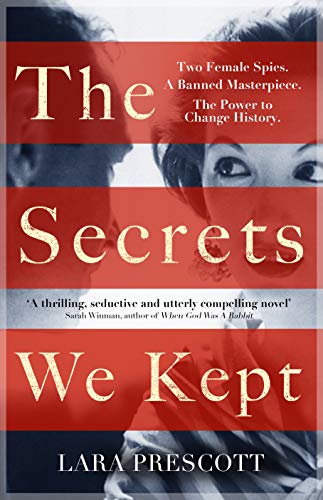 The Secrets We Kept
by Lara Prescott

The Secrets We Kept Summary

The Secrets We Kept: The sensational Cold War spy thriller by Lara Prescott

1956. A celebrated Russian author is writing a book, Doctor Zhivago, which could spark dissent in the Soviet Union. The Soviets, afraid of its subversive power, ban it.

But in the rest of the world it's fast becoming a sensation.

In Washington DC, the CIA is planning to use the book to tip the Cold War in its favour.

Their agents are not the usual spies, however. Two typists - the charming, experienced Sally and the talented novice Irina - are charged with the mission of a lifetime: to smuggle Doctor Zhivago back into Russia by any means necessary.

It will not be easy. There are people prepared to die for this book - and agents willing to kill for it. But they cannot fail - as this book has the power to change history.

'A riveting story of secrets, forbidden passions and the dark arts of espionage. I couldn't put it down!' LISA JEWELL

'Enthralling... This is a rare page-turner with prose that's as wily as its plot.' VOGUE

'I loved this book. So vivid and engaging. A joy to read a story about spies that has lots of women in active roles.' CATHY RENTZENBRINK

'A fascinating story, so cleverly told, of the long chain of people who helped to bring Pasternak's masterpiece into the world. I gulped it down.' GILL HORNBY

'The insight into the workings of the CIA, the portrait of the 1950s and a threatened love affair in the West ... make for riveting reading.' DAILY MAIL

Early readers can't stop talking about The Secrets We Kept:

'I absolutely devoured it. Totally compelling, it made my heart swoop until the very last page.'
'Thrilling, moving and utterly compelling - one of those rare books that makes you forget the outside world.'
'The Secrets We Kept is a brilliant twist on the traditional Cold War spy thriller. It's told through a cast of intelligent and intriguing women and is full of secrets, glamour and love.'
'I absolutely loved it, adored it even, and I can't stop talking about The Secrets We Kept'
'The Secrets We Kept is like nothing else I've read before. The story is vivid and alluring, and one that will stay with you forever.'
'The Secrets We Kept reads like a high-stakes, Mad Men inspired, spy thriller. Classy and glamorous, yet revealing and complex, it has a cast of spectacular characters and a truly emotional core. This really is something special!'

The Secrets We Kept Reviews

What a fantastic novel The Secrets We Kept is. Thrilling, seductive and thoroughly compelling - Lara has created something really special. And it's made me want to re-read Doctor Zhivago! I absolutely loved it! -- SARAH WINMAN
An unusual, stimulating variant on the standard spy thriller. * THE TIMES *
A publishing phenomenon; but more importantly, it is a thoroughly enjoyable read. * GUARDIAN *
Enthralling... This is a rare page-turner with prose that's as wily as its plot. * VOGUE *
A riveting story of secrets, forbidden passions and the dark arts of espionage. I couldn't put it down. -- LISA JEWELL

Lara Prescott was named after the heroine of Doctor Zhivago and first discovered the true story behind the novel after the CIA declassified 99 documents pertaining to its role in the book's publication and covert dissemination.

She travelled the world - from Moscow and Washington, to London and Paris - in the course of her research, becoming particularly interested in political repression in both the Soviet Union and United States and how, during the Cold War, both countries used literature as a weapon.

Lara earned her MFA from the Michener Center for Writers. She lives in Austin, Texas with her husband.

GOR009994616
The Secrets We Kept: The sensational Cold War spy thriller by Lara Prescott
Lara Prescott
Used - Very Good
Hardback
Cornerstone
2019-09-05
480
1786331667
9781786331663
N/A
Book picture is for illustrative purposes only, actual binding, cover or edition may vary.
This is a used book - there is no escaping the fact it has been read by someone else and it will show signs of wear and previous use. Overall we expect it to be in very good condition, but if you are not entirely satisfied please get in touch with us.