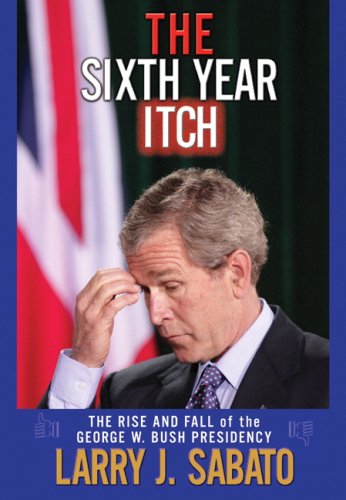 The Sixth Year Itch: The Rise and Fall of the George W. Bush Presidency by Larry J. Sabato

Popular pundit and scholar Larry Sabato edits this contributed volume of essays by well-known journalists and politicians about the results of the 2006 mid-term elections and projections for the 2008 presidential elections.

'Suceeds in what it sets out to accomplish: to provide a detailed and entertaining synthesis as to why the 2006 midterm elections took the form that they did. I would wholeheartedly recommend this text to anyone.' Simon Hill, Liverpool John Moores University

Larry J. Sabato is the Robert Kent Gooch Professor of Politics at the University of Virginia, and the Director of the University of Virginia Center for Politics. His over 20 books include Divided States of America: The Slash and Burn Politics of the 2004 Presidential Election, Get in the Booth: A Citizen's Guide to the 2006 Midterm Elections, and the best-selling American politics text, American Government: Continuity and Change.

In addition to Larry Sabato, the following contributors will be featured:

Chuck Todd, editor in chief of National Journal's The Hotline

Claude Marx, a political columnist for the Eagle-Tribune.

Michael Cornfield, Director of Research at the Democracy Online Project, which is funded by the Pew Charitable Trust, and a professor at George Washington University.

Gwen Florio, reported on Montana's U.S. Senate race as the Capitol bureau chief for the Great Falls Tribune and a correspondent for USA Today

Lawrence Jacobs, the Mondale Chair of the Department of Political Science and the Humphrey Institute at the University of Minnesota.

Joanne Miller, an assistant professor of Political Science at the University of Minnesota.

Maureen Moakley, associate professor of Political Science at the University of Rhode Island.

Jeff Schapiro, a columnist for the Richmond Times-Dispatch.

Bruce Cain, Director of the Institute of Governmental Studies and Robson Professor of Political Science at the University of California at Berkeley.

Susan MacManus, distinguished professor of Government and International Affairs at the University of South Florida

G. Terry Madonna, Director of the Center for Politics and Public Affairs at Franklin and Marshall College.

Jeff Tuttle, writes about politics for the Bangor Daily News.

Charles Bullock, professor of political science at the University of Georgia

Michael W. Traugott, research professor at the Center for Political Studies at the University of Michigan.

Part I: The Big Picture

Chapter 3: The Fight for the Senate. By Stu Rothenberg

Chapter 4: The Governors: Not so much a wave, as a Gentle Democratic Current. By Chuck Todd

Chapter 6: Emerging Campaign Finance Trends and their Impact on the 2006 election. By Michael Toner and Melissa Laurenza

Chapter 8: The Netroots Break Through. By Michael Cornfield

Chapter 10: Montana Senate: Numerous Gaffes and extensive Lobbying Ties prove too much for Burns to Overcome. By Gwen Florio.

Chapter 11: Bucking the Democratic Sweep in Minnesota. By Lawrence Jacobs and Joanne Miller

Chapter 13: Ohio Senate: Not a Close Call After All. By Jonathan Riskind.

Chapter 16: TN Senate: (Almost) All in the Family. By Michael Nelson

Chapter 19: In Spite of Primary Defeat, Lieberman finds a solid Majority in Connecticut. By David Lightman.

Chapter 20: The Governator's Comeback Victory in California. By Bruce Cain.

Chapter 21: Florida Governor and Senate: Split Decisions Give Both Parties Something to Cheer About. By Susan MacManus

Chapter 23: Ohio Governor: Throw the Bums Out. By Joe Hallet.

Chapter 25: Maine Governor: A reversal of fortune. By Jeff Tuttle

Chapter 26: A Bright Spot for the GOP: Sonny Wins Again. By Charles Bullock

Chapter 28: The 2006 Race for Governor in Oregon. By William Lunch.

Chapter 29: The Gubernatorial Race in Michigan. By Michael W. Traugott.

GOR010098646
The Sixth Year Itch: The Rise and Fall of the George W. Bush Presidency by Larry J. Sabato
Larry J. Sabato
Used - Well Read
Paperback
Pearson Education (US)
2007-04-06
528
0321467000
9780321467003
N/A
Book picture is for illustrative purposes only, actual binding, cover or edition may vary.
This is a used book - there is no escaping the fact it has been read by someone else and it will show signs of wear and previous use. Overall we expect it to be in very good condition, but if you are not entirely satisfied please get in touch with us.