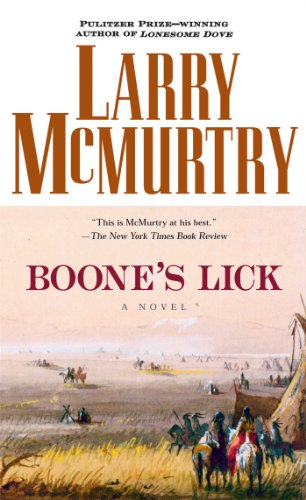 In Stock
$11.49
+10% GST
Mary Margaret's husband, Dickie, is a supply hauler along the Oregon Trail--and a man who enjoys the pleasures of other women across the frontier. Fed up and harboring a secret love of her own, Mary Margaret collects her kids; her brother-in-law, Seth; her sister, Rosie; and her cranky father and journeys west for the ultimate confrontation with her wayward husband.
Very Good
Only 1 left

Boone's Lick is Pulitzer Prize-winning author Larry McMurtry's return to the kind of story that made him famous -- an enthralling tale of the nineteenth-century west. Like his bestsellers Lonesome Dove, Streets of Laredo, Comanche Moon, and Dead Man's Walk, Boone's Lick transports the reader to the era about which McMurtry writes better and more shrewdly than anyone else.
Told with McMurtry's unique blend of historical fact and sheer storytelling genius, the novel follows the Cecil family's arduous journey by riverboat and wagon from Boone's Lick, Missouri, to Fort Phil Kearny in Wyoming. Fifteen-year-old Shay narrates, describing the journey that begins when his Ma, Mary Margaret, decides to hunt down her elusive husband, Dick, to tell him she's leaving him. Without knowing precisely where he is, they set out across the plains in search of him, encountering grizzly bears, stormy weather, and hostile Indians as they go. With them are Shay's siblings, G.T., Neva, and baby Marcy; Shay's uncle, Seth; his Granpa Crackenthorpe; and Mary Margaret's beautiful half-sister, Rose. During their journey they pick up a barefooted priest named Father Villy, and a Snake Indian named Charlie Seven Days, and persuade them to join in their travels.
At the heart of the novel, and the adventure, is Mary Margaret, whom we first meet shooting a sheriff's horse out from underneath him in order to feed her family. Forceful, interesting, and determined, she is written with McMurtry's trademark deftness and sympathy for women, and is in every way a match for the worst the west can muster.
Boone's Lick abounds with the incidents, the excitements, and the dangers of life on the plains. Its huge cast of characters includes such historical figures as Wild Bill Hickok and the unfortunate Colonel Fetterman (whose arrogance and ineptitude led to one of the U.S. Army's worst and bloodiest defeats at the hands of the Cheyenne and Sioux) as well as the Cecil family (itself based on a real family of nineteenth-century traders and haulers).
The story of their trek in pursuit of Dick, and the discovery of his second and third families, is told with brilliance, humor, and overwhelming joie de vivre in a novel that is at once high adventure, a perfect western tale, and a moving love story -- it is, in short, vintage McMurtry, combining his brilliant character portraits, his unerring sense of the west, and his unrivaled eye for the telling detail.
Boone's Lick is one of McMurtry's richest works of fiction to date.

Larry McMurtry is the author of twenty-nine novels, including the Pulitzer Prize-winning Lonesome Dove, three memoirs, two collections of essays, and more than thirty screenplays. He lives in Archer City, Texas.

GOR001941094
Boone's Lick by Larry McMurtry
Larry McMurtry
Used - Very Good
Paperback
Simon & Schuster
2002-04-01
288
0671040588
9780671040581
N/A
Book picture is for illustrative purposes only, actual binding, cover or edition may vary.
This is a used book - there is no escaping the fact it has been read by someone else and it will show signs of wear and previous use. Overall we expect it to be in very good condition, but if you are not entirely satisfied please get in touch with us.