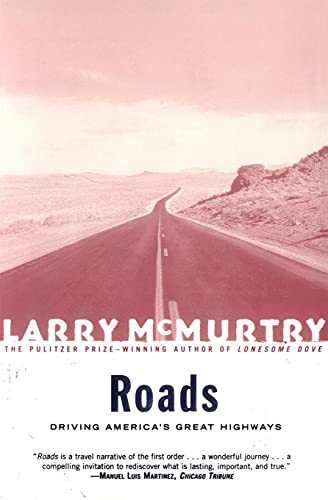 In Stock
$12.99
+10% GST
As he crisscrosses America--driving in search of the present, the past, and himself--western chronicler Larry McMurtry shares his fascination with this nation's great trails and the culture that has developed around them.
Very Good
Only 1 left

As he crisscrosses America -- driving in search of the present, the past, and himself -- Larry McMurtry shares his fascination with this nation's great trails and the culture that has developed around them.
Ever since he was a boy growing up in Texas only a mile from Highway 281, Larry McMurtry has felt the pull of the road. His town was thoroughly landlocked, making the highway his "river, its hidden reaches a mystery and an enticement. I began my life beside it and I want to drift down the entire length of it before I end this book."
In Roads, McMurtry embarks on a cross-country trip where his route is also his destination. As he drives, McMurtry reminisces about the places he's seen, the people he's met, and the books he's read, including more than 3,000 books about travel. He explains why watching episodes of The Mary Tyler Moore Show might be the best way to find joie de vivre in Minnesota; the scenic differences between Route 35 and I-801; which vigilantes lived in Montana and which hailed from Idaho; and the history of Lewis and Clark, Sitting Bull, and Custer that still haunts Route 2 today.
As it makes its way from South Florida to North Dakota, from eastern Long Island to Oregon, Roads is travel writing at its best.

Manuel Luis Martinez Chicago Tribune Roads is a travel narrative of the first order...a wonderful journey...a compelling invitation to rediscover what is lasting, important, and true.
Bill Hoffmann New York Post Roads adds to [McMurtry's] pot of literary gold...among the best American road stories ever written.
Jonathan Yardley The Washington Post Book World Reflective and appealing...the greatest pleasure of this journey is simply to be in the company of a lively and wholly unconventional mind.

GOR002695082
Roads by Larry McMurtry
Larry McMurtry
Used - Very Good
Paperback
Simon & Schuster
2001-06-25
208
0684868857
9780684868851
N/A
Book picture is for illustrative purposes only, actual binding, cover or edition may vary.
This is a used book - there is no escaping the fact it has been read by someone else and it will show signs of wear and previous use. Overall we expect it to be in very good condition, but if you are not entirely satisfied please get in touch with us.