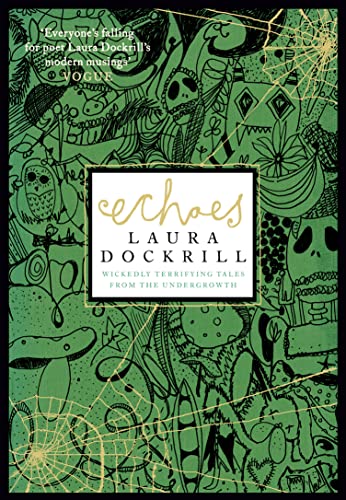 A collection of terrifyingly wicked fairytales and poems from The Times' Talent to Watch, Laura Dockrill

A collection of terrifyingly wicked fairytales and poems from The Times' Talent to Watch, Laura Dockrill

Immerse yourself in the magical world of Laura Dockrill; a land where all is not as it seems. Between the covers of this book lie worlds you'll never want to leave, stories familiar and yet strange, and characters old, made new... Dip inside to discover today's Princess and the Pea, the modern Hansel and Gretel, twenty-first century ghouls, monsters and more. Darkly humorous and bone-shatteringly terrifying - this collection of tales will reel you in and won't let you escape its spell...

'A must-see on the festival circuit, the 24-year-old poet and storyteller takes her inspiration from Tim Burton and Roald Dahl in this gloriously off-kilter collection of modern fairy tales and poems. Beyond cool.' MARIE CLAIRE

`Laura Dockrill is a singular talent in the rave new world world of poetry. Comparison to others would do her no justice. Bright, funny, intelligent and passionate, this is a book you should already be taking away from the shop...' Phill Jupitus

`Mistakes in the Background is an absolute treat ...it's about pure, old-school imagination and art. The poetry shines with playful juvenilia, discussing everything from childhood memories and sibling feuds to croissants, robots and opinionated inanimate objects. It often runs like stream-of-consciousness prose, and is both articulate and wildly creative. The passion that has created this work is evident in every sentence and illustration.' Wears the Trousers Magazine

Laura Dockrill is a poet and illustrator from South London. A graduate of The Brit School of Performing Arts, twenty-three year old Laura was named one of the top ten literary stars of 2008 according to The Times and was voted Elle's top face to watch out for in 2009. Her sassy and unique way with words has captivated audiences at gigs and festivals everywhere, from Glastonbury to the London Word Festival. She has been at the forefront of the performance poetry movement, having appeared on programmes such as 'Woman's Hour' and 'Newsnight Review'. She continues her whistle-stop tour of the UK festival scene this summer, kicking off by headlining the poetry tent at Latitude and continuing with Camp Bestival, The Big Chill and Underbelly on the Southbank, sponsored by E4.

GOR002339317
Echoes by Laura Dockrill
Laura Dockrill
Used - Very Good
Paperback
HarperCollins Publishers
2010-08-05
336
0007301294
9780007301294
N/A
Book picture is for illustrative purposes only, actual binding, cover or edition may vary.
This is a used book - there is no escaping the fact it has been read by someone else and it will show signs of wear and previous use. Overall we expect it to be in very good condition, but if you are not entirely satisfied please get in touch with us.