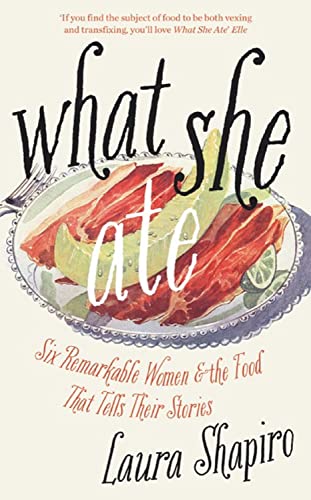 What She Ate
by Laura Shapiro

What She Ate Summary

What She Ate: Six Remarkable Women and the Food That Tells Their Stories by Laura Shapiro

Dorothy Wordsworth believed that feeding her poet brother, William, gooseberry tarts was her part to play in a literary movement.
Cockney chef Rosa Lewis became a favourite of King Edward VII, who loved her signature dish of whole truffles boiled in Champagne.
Eleanor Roosevelt dished up Eggs Mexican - a concoction of rice, fried eggs, and bananas - in the White House.
Eva Braun treated herself to Champagne and cake in the bunker before killing herself, alongside Adolf Hitler.
Barbara Pym's novels overflow with enjoyment of everyday meals - of frozen fish fingers and Chablis - in midcentury England.
Cosmopolitan editor Helen Gurley Brown's idea of "having it all" meant having almost nothing on the plate except a supersized portion of diet gelatin.

In the irresistible What She Ate, Laura Shapiro examines the plates, recipe books and shopping trolleys of these six extraordinary women, casting a new light on each of their lives - revealing love and rage, desire and denial, need and pleasure.

What She Ate Reviews

`In this joyful examination of six women's lives in food, Shapiro sets out to excavate the minutiae of domestic routines for insights into the connection between mental state and menu ... Always entertaining and brimming with enticing small details, from an image of Roosevelt scrambling eggs at the table in a dinner-party performance piece, to Pym noticing that Philip Larkin refused Brie at lunch.' Francesca Wade, Financial Times

`What She Ate is a culinary and historical delight. Feast on it slowly so as not to miss a crumb' BookPage

`I devoured the book in one sitting' Washington Post

`Fascinating. Shapiro, like a consummate maitre d', sets down plate after plate and an amazing thing happens: Slowly the more familiar accounts of each of the women's lives recede and other, messier narratives emerge. How lucky for us readers that Shapiro has been listening so perceptively for decades to the language of food.' NPR

`A collection of deft portraits in which food supplies an added facet to the whole.What She Ate redeems the whole sentimental, self-indulgent genre of food writing' Slate

`A unique and delectable work' Kirkus

`What She Ate establishes Laura Shapiro as the founder of a delectable new literary genre: the culinary biography. A richly satisfying volume' Megan Marshall

`I wolfed down this wonderful account of the eating lives and habits of six notable and very diverse women ... Shapiro ... writes both engagingly and a trifle wryly' Bookseller

`Riveting. Shapiro reveals with wit and irony so much that is fascinating and unknown. What She Ate is both menu degustation and grand banquet' Claudia Roden

Laura Shapiro has written on every food topic from champagne to Jell-O for The New York Times, The New Yorker, The Atlantic, Slate, Gourmet, and many other publications. She is the author of three classic books of culinary history. Her awards include a James Beard Journalism Award and one from the National Women's Political Caucus. She has been a fellow at the Dorothy and Lewis B. Cullman Center for Scholars and Writers at the New York Public Library, where she also co-curated the widely acclaimed exhibition Lunch Hour NYC.

GOR009874773
What She Ate: Six Remarkable Women and the Food That Tells Their Stories by Laura Shapiro
Laura Shapiro
Used - Like New
Hardback
HarperCollins Publishers
2018-01-25
320
0008281076
9780008281076
N/A
Book picture is for illustrative purposes only, actual binding, cover or edition may vary.
This is a used book - there is no escaping the fact it has been read by someone else and it will show signs of wear and previous use. Overall we expect it to be in very good condition, but if you are not entirely satisfied please get in touch with us.