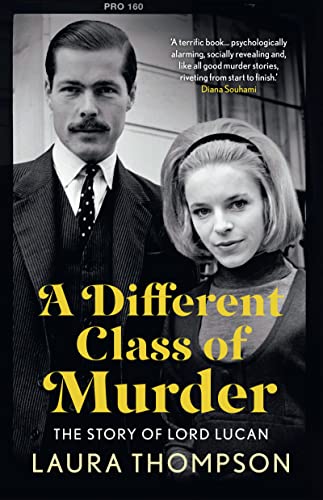 A Different Class of Murder by Laura Thompson

An authoritative account of the Lucan case, which has remained etched on the psyche of a fascinated and appalled public for 40 years.

A Different Class of Murder by Laura Thompson

On 7 November 1974, a nanny named Sandra Rivett was bludgeoned to death in a Belgravia basement. A second woman, Veronica, Countess of Lucan, was also attacked. The man named in court as perpetrator of these crimes, Richard John Bingham, 7th Earl of Lucan, disappeared in the early hours of the following morning. The case, solved in the eyes of the law, has retained its fascination ever since.

Laura Thompson, acclaimed biographer of Agatha Christie, narrates the story that led up to that cataclysmic event, and draws on her considerable forensic skills to re-examine the possible truths behind one of postwar Britain's most notorious murders. A DIFFERENT CLASS OF MURDER is a portrait of an era, of an extraordinary cast of characters, of a mystery, of a modern myth. Part social history, part detective story, it tells in masterly style one of the great tales of our collective living memory.

'Gripping ... an exceptionally thorough examination' * Daily Mail *
'Sensational ... the most minutely researched and brilliantly told account ever' * Mail on Sunday *
'Tantalises with fresh evidence' * The Daily Telegraph *
'A compelling new examination of the crime and a brilliant detective mind ... fascinating ... Thompson gives us a tantalising range of alternative scenarios in this superb anatomy of a murder' * Independent *
'This gripping read is part social history, part detective story ... fascinating' * Bella *
'Thompson delivers the goods: a compelling narrative, hypotheses based on evidence and a possible solution. But she goes further, putting the murder in the telling context of British aristocracy and social attitudes towards it' * The Times *
'Thompson is a fine writer and one can't help admiring the way she breathes new life into an intriguing tale' * Literary Review *
'[Laura Thompson] gets her teeth into the case, drawing on Lucan's friends the Shand-Kydds, finding a new source in an anonymous Lucan schoolfriend, and finally producing a narrative which is sympathetic to Lucan, but less so to his wife' * TLS *
'Thompson re-examines a tantalizingly ambiguous crime, delving deep into a complicated story and emerging with a gripping narrative that offers a fresh perspective and new solutions to one of the most infamous cases of the 20th century' * Good Book Guide. *
'Thompson approaches the mystery with forensic skill, [reaching] a suitably enigmatic conclusion' * Daily Mail. *
Laura Thompson is author of Somerset Maugham Award-winning THE DOGS: A PERSONAL HISTORY OF GREYHOUND RACING, and AGATHA CHRISTIE: AN ENGLISH MYSTERY. She is now filming a major ITV programme on Agatha Christie.
GOR006428936
9781781855362
1781855366
A Different Class of Murder by Laura Thompson
Laura Thompson
Used - Very Good
Hardback
Head of Zeus
2014-11-06
480
N/A
Book picture is for illustrative purposes only, actual binding, cover or edition may vary.
This is a used book - there is no escaping the fact it has been read by someone else and it will show signs of wear and previous use. Overall we expect it to be in very good condition, but if you are not entirely satisfied please get in touch with us
Trustpilot