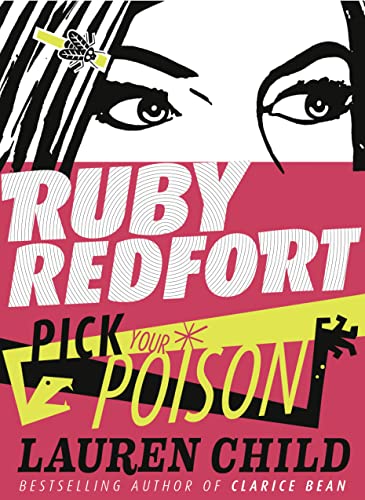 Pick Your Poison
by Lauren Child

Ruby Redfort: undercover agent, code-cracker and thirteen-year-old genius - you can count on her when you're between a rock and a hard place.

There's a lot to lose sleep over in Twinford: there's the snakes and the bivalves, but they aren't half as poisonous as the rumours. With so many twists and turns it's hard to know who to trust, particularly when no one trusts you. Will Ruby make it out in one piece? Well, happy endings are for fairy tales, bozo.

`Lauren Child is so good it's exhilarating' - The Independent

Praise for the Ruby Redfort series:

`The coolest girl hero in years ... Child refuses to write down to her tween and teen audience and challenges readers with more twists than a curling tongs party' The Times

`Lauren Child has put imagination and fun back into the real worlds of childhood' - Julia Eccleshare, Guardian

`What more could adventure-loving girls want?' - The Sunday Times

Lauren Child burst on to the children's books scene in 1999 and has since published many bestselling and award-winning books, including those featuring the hugely popular Charlie and Lola, and the Clarice Bean series. She has won numerous awards including the prestigious Kate Greenaway Medal and the Smarties Gold Award. Her books have been made into an award-winning TV series and have sold in many languages with runaway success.

GOR007139399
Pick Your Poison (Ruby Redfort, Book 5) by Lauren Child
Lauren Child
Ruby Redfort
Used - Very Good
Hardback
HarperCollins Publishers
2015-10-19
528
0007334265
9780007334261
N/A
Book picture is for illustrative purposes only, actual binding, cover or edition may vary.
This is a used book - there is no escaping the fact it has been read by someone else and it will show signs of wear and previous use. Overall we expect it to be in very good condition, but if you are not entirely satisfied please get in touch with us.