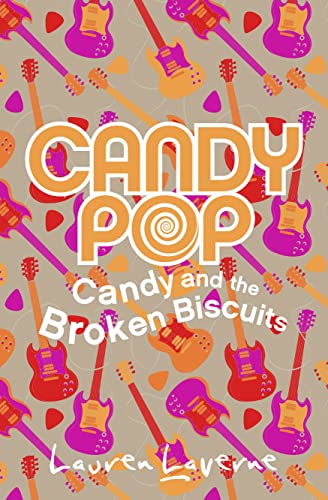 Candy and the Broken Biscuits
by Lauren Laverne

Candy and the Broken Biscuits Summary

Candy and the Broken Biscuits (Candypop, Book 1) by Lauren Laverne

Misunderstood musical genius Candy Caine - age fifteen - knows she's destined for a bigger life beyond her small-town existence. And now Mum is marrying The World's Dullest ManTM it's time to put plans into action and achieve world domination with her band, The Broken Biscuits. Oh - and find her real dad, who will most definitely be cool and, of course, will verify her own super specialness.

With a battered old guitar and some supernatural assistance, can Candy get her life on track and her new band on the road to greatness? Candy Caine is the hilarious new creation of debut author Lauren Laverne - a writer who's been there, done that and customised the T-shirt.

Lauren first came into the spotlight as a singer in the cult indie group Kenickie, later moving into broadcasting, presenting shows such as CD:UK, The Culture Show, The Brits and Glastonbury. She has interviewed everyone from Sir Paul McCartney, U2 and Madonna to Dizzee Rascal and Little Boots. After encouragement from her husband of four years (who said "you're an excellent speller") Lauren recently began writing again. She is a Grazia columnist and has also written for the Guardian.

GOR001952719
Candy and the Broken Biscuits (Candypop, Book 1) by Lauren Laverne
Lauren Laverne
Candypop
Used - Very Good
Paperback
HarperCollins Publishers
2010-05-27
272
0007346263
9780007346264
N/A
Book picture is for illustrative purposes only, actual binding, cover or edition may vary.
This is a used book - there is no escaping the fact it has been read by someone else and it will show signs of wear and previous use. Overall we expect it to be in very good condition, but if you are not entirely satisfied please get in touch with us.