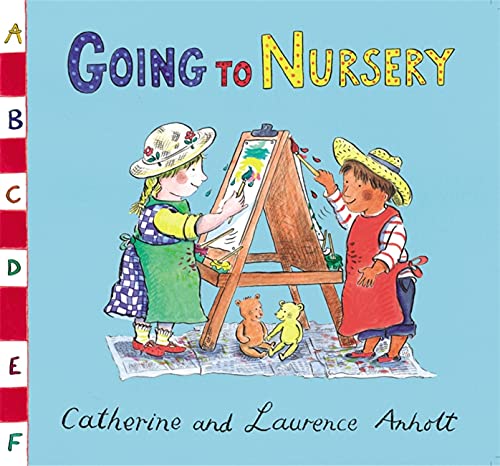 Anna is a bit worried about starting nursery. She doesn't want to leave her mummy and she won't know anyone there ... But soon Anna is having lots of fun, painting, dressing up and playing with new friends!

Starting nursery is an exciting but anxious time for every family, and sharing this book together is the perfect way to prepare for the big day. The simple, reassuring story covers meeting the teacher, snack-time, going to the loo, making friends and doing all sorts of fun activities. So your little one will know just what to expect on their first day.

Young children and adults alike will enoy sharing and talking about this much-loved classic picture book, with its delightful and amusing insight into the joys and trepidations of starting nursery * Burton Mail *

Laurence Anholt (Author)
Laurence and Catherine Anholt live and work in a house and studios on top of a hill above the sea in Devon. They started making picture books in 1984 when their first daughter was born. Since then they have made more than 200 classic picture books, which are published all over the world in more than 30 languages.

Their titles range from their Orchard picture book series which include Babies Love Books and Billy and the Big New School; to Laurence's self-illustrated Anholt's Artists series, an introduction to great artists for young children, which include Camille and the Sunflowers. Laurence also collaborates with his friend, the illustrator, Arthur Robins on the bestselling Seriously Silly Stories, which include the Nestle Smarties Gold Award winner Snow White and the Seven Aliens.

The Anholts' books have won many awards and are frequently featured on television and radio. Babies, Babies, Babies is listed in The Sunday Times 100 Modern Classics. Laurence was included in the Independent on Sunday's Top 10 Children's Authors in the UK and was described as 'one of the most versatile authors writing for children today'.

Laurence was brought up mainly in Holland where he developed a lasting passion for art. He then went on to study Fine Art for eight years, finishing with a Master's Degree from the Royal Academy of Art in London.

The Anholts have been closely involved with a number of literacy schemes such as the UK Government funded Bookstart scheme, which encourages parents to share books with babies from the earliest possible age. Their work has taken them inside Buckingham Palace and Downing Street on many occasions. Recent projects include a full-scale stage musical in Korea.

Laurence and Catherine have three grown up children: Claire works for the UN in New York, Tom Anholt is a painter living in Berlin and Maddy is an actor based in London.

Laurence's favourite things include, 'my lovely family, travelling to wild places and anything to do with art'. The best way to relax? 'A long soak in a warm book.'

Catherine Anholt (Illustrator)
Catherine and Laurence Anholt are a husband and wife team who have produced about 200 children's books, published in more than 30 languages around the world. Their books have won numerous awards, including the Nestle Smarties Gold Award on two occasions.

Catherine comes from an Irish family and is one of eight brothers and sisters. Catherine and Laurence met while studying Fine Art at Falmouth School of Art. They went on to take Master's Degrees at the Royal College of Art and the Royal Academy respectively.

Around half of the Anholts' titles are illustrated by Catherine, including the Chimp and Zee series and numerous picture books published by Orchard Books.

The Anholts have been closely involved with a number of literacy charities and Catherine produced some of the original material for the highly successful government funded BookStart scheme, which encourages parents to share books with babies from the earliest possible age. Their work has taken them inside Downing Street and Buckingham Palace on several occasions.

Catherine and Laurence live near the sea in Devon. They have three grown up children: Claire works for the UN in New York, Tom Anholt is a painter living in Berlin and Maddy is an actor based in London.

Alongside her children's books, Catherine produces hundreds of painting and prints. You can see some of them at: www.catherineanholt.com

GOR007188244
Anholt Family Favourites: Going to Nursery by Laurence Anholt
Laurence Anholt
Anholt Family Favourites
Used - Very Good
Paperback
Hachette Children's Group
2015-02-23
32
1408338971
9781408338971
N/A
Book picture is for illustrative purposes only, actual binding, cover or edition may vary.
This is a used book - there is no escaping the fact it has been read by someone else and it will show signs of wear and previous use. Overall we expect it to be in very good condition, but if you are not entirely satisfied please get in touch with us.