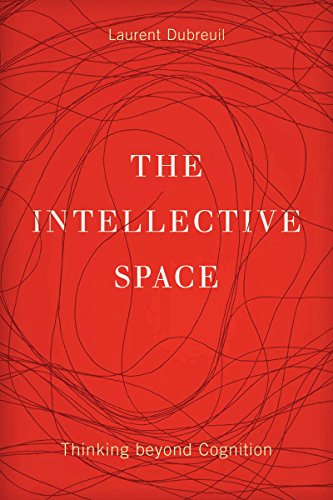 The Intellective Space by Laurent Dubreuil

The Intellective Space: Thinking beyond Cognition by Laurent Dubreuil

The Intellective Space explores the nature and limits of thought. It celebrates the poetic virtues of language and the creative imperfections of our animal minds while pleading for a renewal of the humanities that is grounded in a study of the sciences.

According to Laurent Dubreuil, we humans both say more than we think and think more than we say. Dubreuil's particular interest is the intellective space, a space where thought and knowledge are performed and shared. For Dubreuil, the term "cognition" refers to the minimal level of our mental operations. But he suggests that for humans there is an excess of cognition due to our extensive processing necessary for verbal language, brain dynamics, and social contexts. In articulating the intellective, Dubreuil includes "the productive undoing of cognition."

Dubreuil grants that cognitive operations take place and that protocols of experimental psychology, new techniques of neuroimagery, and mathematical or computerized models provide access to a certain understanding of thought. But he argues that there is something in thinking that bypasses cognitive structures. Seeking to theorize with the sciences, the book's first section develops the "intellective hypothesis" and points toward the potential journey of ideas going beyond cognition, after and before computation. The second part, "Animal Meditations," pursues some of the consequences of this hypothesis with regard to the disparaged but enduring project of metaphysics, with its emphasis on categories such as reality, humanness, and the soul.

Laurent Dubreuil is professor of comparative literature and romance studies, as well as a member of the Cognitive Science Program and Graduate Field at Cornell University. He is the author of five other books of literary theory and philosophy, including The Empire of Language, and several works of creative writing in French, including Generation romantique. He serves as editor of the journal diacritics.

I. The Intellective Hypothesis
Cogitation and Cognition
A Holed Fabric
Supplemental Journeys
Semanticism and Language
Logical Lines
Significant Contradictions
II. Animal Meditations
Metaphysics of the Real
Measures of the Human
Self-Specification
The Translife of the Soul
Acknowledgments
Notes
Repertory
Index

NGR9780816694853
9780816694853
0816694850
The Intellective Space: Thinking beyond Cognition by Laurent Dubreuil
Laurent Dubreuil
Posthumanities
New
Paperback
University of Minnesota Press
2015-03-20
160
N/A
Book picture is for illustrative purposes only, actual binding, cover or edition may vary.
This is a new book - be the first to read this copy. With untouched pages and a perfect binding, your brand new copy is ready to be opened for the first time
Trustpilot