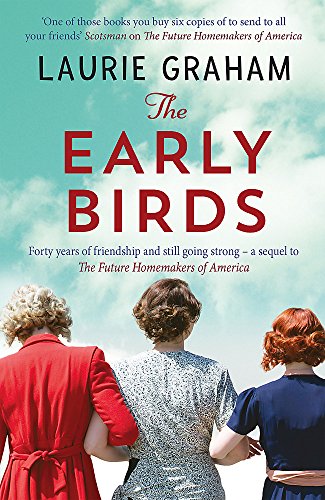 The Early Birds by Laurie Graham

A poignant follow-up to The Future Homemakers of America - warm-hearted and sparklingly witty women's fiction for fans of The Divine Secrets of the Ya-Ya Sisterhood, Fannie Flagg and Anne Tyler

The Early Birds by Laurie Graham

The Early Birds is the touching and funny follow-up to The Future Homemakers of America.

'Funny, heartwarming and a real treat. I would recommend it to anyone!' Katie Fforde

'Wit and insight to match Nick Hornby, and the entertainment value of Helen Fielding' Independent on The Future Homemakers of America

'Why is Laurie Graham not carried on people's shoulders through cheering crowds? Her books are brilliant!' Marian Keyes

Peggy, the southern belle. Kath, the pragmatist with the only Norfolk accent in New York state. Gayle, the preacher with healing hands. Mrs Colonel Audrey Rudman, forever keeping up the standards of the Officers' Wives Club. Lois, who's never had a thought she didn't voice. Loudly.

Their menfolk may be long retired, but once a US Air Force wife, always an Air Force wife, and the bonds of friendship forged in base after military base are still going strong fifty years later. Time is rendering its Accounts Payable for all of them now: hip replacements, eye problems, forgetfulness and departures.

In this hymn to lifelong female friendship, Peggy soldiers on through new upheavals, including her ex-husband Vern's Alzheimer's diagnosis, the death of one of her nearest and dearest, a life-changing house move and the world-shattering events of 9/11 with the help of her sharp-tongued, often eccentric, but always loyal group of friends.

She has wit and insight to match Nick Hornby, and the entertainment value of Helen Fielding, as well as depth . . . It amounts to a picture of the way women's lives have changed, without ever sacrificing the particular to the generalisation - Independent on The Future Homemakers of AmericaSuperlative. The writing sparkles from first to last - Sunday Telegraph on The Future Homemakers of AmericaThis novel crackles with energy and snappy American dialogue. Laurie Graham conjures up five tough, funny, mouthy women, thrown together at an American airbase in Norfolk . . . Graham has pulled off an absolute triumph; the voice of her sassy narrator, the redoubtable Peggy, never falters as she unfolds 40 years of friendship - Daily Mail on The Future Homemakers of AmericaLaugh-out-loud funny; intelligent; moving; has more delicious roll-off-the-tongue one-liners than Seinfeld. One of those books you buy six copies of to send to all your old friends - Scotsman on The Future Homemakers of AmericaA delightfully smart and sophisticated historical novelist - Sunday TimesOne of my favourite writers
Laurie Graham is a former Daily Telegraph columnist and contributing editor of She magazine. The author of several acclaimed novels, most recently The Grand Duchess of Nowhere and The Night in Question (2015), Laurie lives in Dublin. Visit her website at www.lauriegraham.com
GOR009175401
9781784297930
1784297933
The Early Birds by Laurie Graham
Laurie Graham
Used - Very Good
Paperback
Quercus Publishing
2018-01-11
352
N/A
Book picture is for illustrative purposes only, actual binding, cover or edition may vary.
This is a used book - there is no escaping the fact it has been read by someone else and it will show signs of wear and previous use. Overall we expect it to be in very good condition, but if you are not entirely satisfied please get in touch with us
Trustpilot