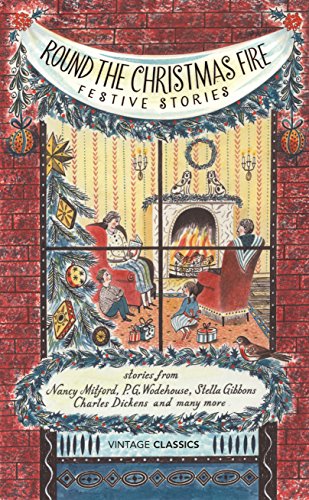 Round the Christmas Fire
by Laurie Lee

Out of Stock
$21.49
inc. GST
If the weather outside is frightful, draw up a chair to the fire, get the chesnuts roasting, and find an echo to every mood in this collection of funny, surprising, moving and magical festive stories from some of our greatest authors.
Very Good
Only 0 left

Round the Christmas Fire Summary

Round the Christmas Fire: Festive Stories by Laurie Lee

If the weather outside is frightful, draw up a chair to the fire, get the chesnuts roasting, and find an echo to every mood in this collection of funny, surprising, moving and magical festive stories from some of our greatest authors. Including stories from Laurie Lee, Truman Capote, Kenneth Graham, John Cheever, Sue Towsend, Nancy Mitford, Dylan Thomas, Charles Dickens, John Julius Norwich, P.G. Wodehouse and Stella Gibbons, among many others.

Round the Christmas Fire Reviews

"An attractively quaint-looking hardback collection of festive stories" * Herald *
"PRAISE FOR STORIES TO GET YOU THROUGH THE NIGHT: You should resort to the lovely gift of Stories to Get You Through the Night ... this selection does what it says....everyone could do with a draught of this classic vintage" * The Times *
"PRAISE FOR DICKENS AT CHRISTMAS: 'A beautiful gift edition of not only all of Dickens' Christmas novels but also his festive stories, written for the special seasonal editions of his periodicals'" -- Kate Skipper, Waterstones * Independent *

Nancy Mitford was born in London on November 28 1904, daughter of the second Baron Redesdale, and the eldest of six girls. Her sisters included Lady Diana Mosley and Deborah, Duchess of Devonshire. Nancy wrote a series of popular novels including The Pursuit of Love and Love in a Cold Climate. In the 1950s she began writing historical biographies - her life of Louis XIV, The Sun King, became an international bestseller. Nancy Mitford died on 30 June 1973. Laurie Lee was born in Stroud, Gloucestershire, in 1914. At the age on nineteen he walked to London and then travelled on foot through Spain, where he was trapped by the outbreak of the Civil War. He later returned by crossing the Pyrenees, as described in his book As I Walked Out one Midsummer Morning. Laurie Lee died in May 1997. Montague Rhodes James was born on 1 August 1862 near Bury St Edmunds. He studied at Eton and Kings College, Cambridge, where he was eventually elected Fellow. He remains best known for his own ghost stories, which were published in several collections, including Ghost Stories of an Antiquary (1904), A Thin Ghost and Other Stories (1919), A Warning to the Curious (1925) and a collected edition in 1931. M. R. James never married and died on 12 June 1936. Edith Wharton was born on 24 January 1862 in New York. Her most famous novels include The House of Mirth (1905), Ethan Frome (1911), The Custom of the Country (1913) and The Age of Innocence (1920). She lived in France from 1907 and died on 11 August 1937. The author of almost a hundred books and the creator of Jeeves, Blandings Castle, Psmith, Ukridge, Uncle Fred and Mr Mulliner, P.G. Wodehouse was born in 1881 and educated at Dulwich College. After two years with the Hong Kong and Shanghai Bank he became a full-time writer, and as well as his novels and short stories, he wrote lyrics for musical comedies. He died in February 1975, after receiving a knighthood, at the age of 93. Robert Francis Kilvert was born at Hardenhuish, near Chippenham, in Wiltshire on 3 December 1840. He became vicar of Bredwardine in Herefordshire in 1877. In 1879 he married Elizabeth Rowland, whom he had met during a visit to Paris. But after little more than a month of marriage, Kilvert died suddenly of peritonitis, aged only thirty-nine. George and Weedon Grossmith were born in London in 1847 and 1852 respectively. George became a popular composer and actor, while Weedon trained as a painter. The Diary of a Nobody began life as a series of columns in Punch. It was published as a novel in 1892 to instant acclaim and has remained in print ever since. George died in 1912, followed by his brother in 1919. Kenneth Grahame was born in Edinburgh on 8 March 1859. He went to school in Oxford before starting work at the Bank of England. The Wind in the Willows (1908) is based on letters and stories that Graham made for his only child, Alistair. The novel's popularity grew slowly over the years and A.A. Milne's dramatisation of the novel as Toad of Toad Hall brought it greater success. Kenneth Grahame died on 6 July 1932. Stella Gibbons was born in London in 1902. She studied journalism at University College, London, and worked for ten years on various papers, including the Evening Standard. Stella Gibbons is the author of twenty-five novels, three volumes of short-stories, and four volumes of poetry, and is best known for Cold Comfort Farm (1932). She was elected a Fellow of the Royal Society of Literature in 1950 and died in 1989. John Cheever was born in Quincy, Massachusetts, in 1912. He is the author of seven collections of stories and five novels. His first novel, The Wapshot Chronicle, won the 1958 National Book Award. In 1978 he won the National Book Critics Circle Award and the Pulitzer Prize. Shortly before his death in 1982 he was awarded the National Medal for Literature. Charles Dickens was born in Hampshire on 7 February 1812. His career as a writer of fiction started in 1833 when his short stories and essays began to appear in periodicals. The Pickwick Papers, his first commercial success, was published in 1836. Oliver Twist and many other novels followed. The Old Curiosity Shop brought Dickens international fame and he became a celebrity America as well as Britain. Charles Dickens died on 9 June 1870 and is buried in Westminster Abbey. Edith Nesbit was born in 1858. As young married woman with small children, she sold stories and poems to supplement the family income. Her first children's book, The Treasure Seekers, was published in 1899. She also wrote Five Children and It but her most famous story, The Railway Children, was first published in 1905 and has never been out of print. Edith Nesbit died in 1924.

GOR005328717
Round the Christmas Fire: Festive Stories by Laurie Lee
Laurie Lee
Used - Very Good
Hardback
Vintage Publishing
2013-01-12
288
0099577070
9780099577072
N/A
Book picture is for illustrative purposes only, actual binding, cover or edition may vary.
This is a used book - there is no escaping the fact it has been read by someone else and it will show signs of wear and previous use. Overall we expect it to be in very good condition, but if you are not entirely satisfied please get in touch with us.