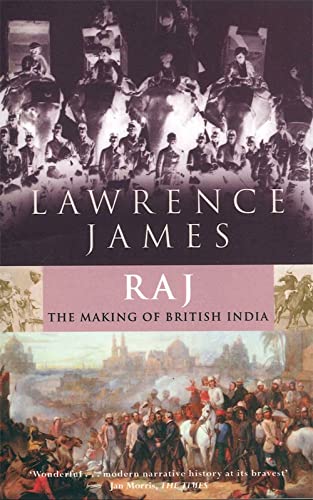 * A book that is narrative-driven, but full of outstanding scholarship and insight.
* Subtitled 'The Making and Unmaking of British India' - how the British Raj shaped the Indian sub-continent as it is today.

Raj: The Making and Unmaking of British India by Lawrence James

This is the brilliantly told story of one of the wonders of the modern world - how in less than a hundred years the British made themselves masters of India. They ruled it for another hundred, departing in 1947, leaving behind the independent states of India and Pakistan. British rule taught Indians to see themselves as Indians and its benefits included railways, hospitals, law and a universal language. But the Raj, outwardly so monolithic and magnificent, was always precarious. Its masters knew that it rested ultimately on the goodwill of Indians. This is a new look at a subject rich in incident and character; the India of the Raj was that of Clive, Kipling, Curzon and Gandhi and a host of lesser known others. RAJ will provoke debate, for it sheds new light on Mountbatten and the events of 1946-47 which ended an exercise in benign autocracy and an experiment in altruism.

The range, sweep and sheer verve of theb ook are prodigious....A masterpiece. * A N WILSON *
His feeling for historical detail cannot be faulted and is made more engaging by his scholarship and infectious enthusiasm for the subject. * SCOTLAND ON SUNDAY *
With this superb history of the mammoth subject (James') writing career has reached its apogee. * THE TIMES *
James never loses sight of his grand design, yet he still finds room for the telling detail which illuminates and enriches the narrative. * DAILY TELEGRAPH *

Lawrence James was born in Bath and was educated at the University of York and Merton College, Oxford. After a distinguished teaching career he has emerged as one of the outstanding narrative historians of his generation.

GOR001252092
Raj: The Making and Unmaking of British India by Lawrence James
Lawrence James
Used - Very Good
Paperback
Little, Brown Book Group
1998-11-05
736
0349110123
9780349110127
N/A
Book picture is for illustrative purposes only, actual binding, cover or edition may vary.
This is a used book - there is no escaping the fact it has been read by someone else and it will show signs of wear and previous use. Overall we expect it to be in very good condition, but if you are not entirely satisfied please get in touch with us.