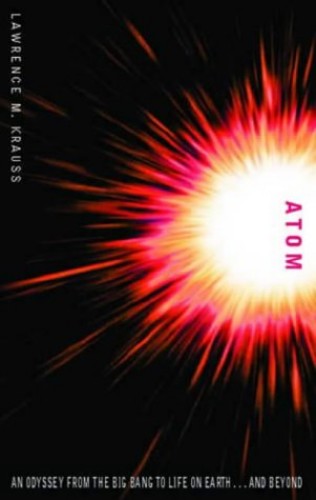 Used Price
$27.49
inc. GST
Free Shipping in Australia
Subtitled 'An Odyssey from the Big Bang to Life on Earth...and Beyond', ATOM tells the story of matter from the perspective of a single oxygen atom.
Reviews:
Trustpilot
Very Good Good

Atom: An Odyssey from the Big Bang to Life on Earth by Lawrence Krauss

Not only is matter constantly changing - or 'morphing' - but it was created at the beginning of the universe and will cease to exist only when our universe does. In ATOM, Krauss describes the journey of a single oxygen atom throughout our universe. Starting with its emergence at the Big Bang, Krauss will show how atoms were then forged in the nuclear furnaces of stars. From there, the reader will follow the atom as it travels across the Milky Way, and finally arrives on Earth, where it finds itself located in a drop of water, perhaps in the next glass of water you will drink. Along the way, Krauss supplies provocative reflections on the bigger questions, such as the origins of DNA (on a comet?) and the place of atoms in our everyday life. A clever combination of cutting-edge science and everyday phenomena, ATOM allows us to see both in a new light - through a glass, but not darkly!

ATOM has a truly astounding breadth...Krauss present[s] the ideas with great clarity. With a little effort, readers will reap big rewards here * NEW SCIENTIST *
A reader of this book will travel with the atom, and learn a great deal of modern particle physics, astrophysics and molecular biology * NEW SCIENTIST *
It's mind-boggling stuff, told with humour and a rich tapestry of literary associations. Even the least scientifically inclined will be able to comprehend the events that shaped the universe and which conspired to create our own solar system * TIMES HIGHER EDUCATION SUPPLEMENT *
The history of the cosmos might seem an impossibly big subject for a single book. But in Atom: an Odyssey from the Big Bang to Life on Earth...and Beyond, bestselling American science-writer Lawrence M. Krauss manages to do just that. By centering his st * FOCUS *
[Krauss] admits he had to learn [geology and biology] from scratch before writing ATOM. Not only had he mastered them, he often finds lyrical ways of explaining ideas in both fields. Indeed, the standard of writing in Atom is perhaps even higher than in his 1995 bestseller, The Physics of Star Trek * Guardian *

Lawrence Krauss is the bestselling author of THE PHYSICS OF STAR TREK, FEAR OF PHYSICS: A GUIDE FOR THE PERPLEXED. He chairs the Department of Physics at Case Western Reserve University, Cleveland.

GOR001238786
Atom: An Odyssey from the Big Bang to Life on Earth by Lawrence Krauss
Lawrence Krauss
Used - Very Good
Paperback
Little, Brown Book Group
2002-05-02
416
0349114838
9780349114835
N/A
Book picture is for illustrative purposes only, actual binding, cover or edition may vary.
This is a used book - there is no escaping the fact it has been read by someone else and it will show signs of wear and previous use. Overall we expect it to be in very good condition, but if you are not entirely satisfied please get in touch with us.