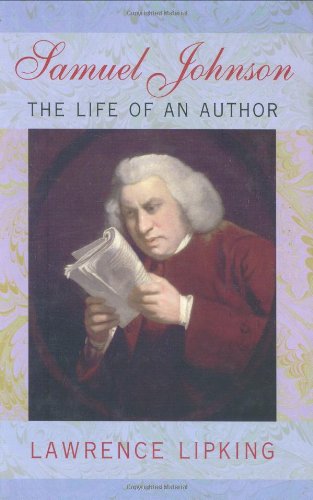 Tracing Samuel Johnson's rocky climb from anonymity to fame, in the course of which he came to stand for both the greatness of English literature and the good sense of the common reader, this text shows how this life transformed the very nature of authorship.

Samuel Johnson: Life of an Author by Lawrence Lipking

The career of Samuel Johnson, as recounted here by Lawrence Lipking, aims to prove that a writer can be both hack and hero. It further argues that academic fashions may be a bit hasty in pronouncing, after Roland Barthes, the "death of the author". This is a text about how an author is made, not born, the story of how Samuel Johnson lived - and lives - in his work. Tracing Johnson's rocky climb from anonymity to fame, in the course of which he came to stand for both the greatness of English literature and the good sense of the common reader, it describes how this life transformed the very nature of authorship. Beginning with the defiant letter to Chesterfield that made Johnson a celebrity, this text offers fresh readings of all the writer's major works, viewed through the lens of two ongoing preoccupations: the urge to do great deeds; and the sense that bold expectations are doomed to disappointment. Johnson steered between the twin perils of ambition and despondency. Mounting a challenge to the emerging industry that glorified and capitalized on Shakespeare, Johnson instead stressed the playwright's power to cure the illusions of everyday life.
"First, this will be a biography concentrating on its hero's writings and career--no anecdotes about Johnson and his wife on horseback. Second, it is to be an exemplary biography, in showing that Johnson may stand as the type of the author. Third, 'the life of an author' rings out as Johnson's own phrase. Lipking avails himself of it in the conviction that the literature of the past should prompt not griping but gratitude...Then, in straightforward and compelling sequence, [he] attends to the supreme achievements...Lipking is scrupulous in citing Johnson scholars (this is a modest book as well as one that takes pride in its work), while his relations are his own." --Christopher Ricks, "Boston Sunday Globe"

"Focusing primarily on the work, not the life, Lipking explores how through a combination of hackwork, drudgework (his famous dictionary), and imaginative literature, Johnson elevated himself to the status of a literary celebrity in his own time and a canonical author for all time. Deftly blending current academic theory with Johnson's own common-sense approach to literary criticism, Samuel Johnson is a good book for any Johnson aficionado on your Christmas list." --Scott Stossel, "Boston Phoenix"

"Lipking's story is of how Johnson made professional authorship respectable. Before him, a gentleman disdained the seamy business of selling writing. After him, it became a virtuous necessity." --John Mullan, "The Guardian" [UK]

"Lawrence Lipking has devoted a lifetime to reading and reflecting on Samuel Johnson, and his studydiffers from all the works on Johnson that have been written to date by focusing on how an obscure hack writer, 'almost unknown until his forties, ' became an author 'who dominated his age' and gave it his name, the Age of Johnson. Lipking is not interested in Johnson the great conversationalist or the quirky personality; rather he traces Johnson's literary career from his juvenilia, beginning with his poem 'On a Daffodil' composed when he was fifteen, to his last great achievement in publishing "The Lives of the English Poets" (1779-1781)...A moving account of Johnson's death and its fascination for his friends and the public rounds out this eminently readable and enjoyable book...This is a welcome scholarly contribution to Johnsonian studies." --Michael Shinagel, "Harvard Review"

"[A] fine new book...It is brave and admirable of Mr. Lipking to have written a 'generalist' book about Johnson as author, addressed to the generalist reader. Lipking takes up, pretty much in chronological order, the main pieces of writing through which Johnson survives...The claim implicitly made in [his] choices is that Lipking has something forceful, even new, to tell us about items central to Johnson's achievement as a writer, an author; this claim is handsomely substantiated in the book he has written...Lawrence Lipking should be proud of his own tribute to Johnson, a work no less of learning than of love." --William H. Pritchard, "Hudson Review"

"In "Samuel Johnson," [Lipking] eschews the traditional approaches to biographical study, focusing instead on Johnson's works as a means of revealing not just the man's character and literary philosophy but also his attitude toward the authorialprofession and the role of the writer in society..."Samuel Johnson" makes a convincing case for studying the works rather than biographical facts to shed light on Johnson the writer, and Lipking amply demonstrates that this man--talented, ambitious, yet constantly struggling against depression and oppression--not only developed a singular identity but also came to epitomize what it meant to be an author." --Gerald H. Strauss, "Magill's Literary Annual"

"Lipking's story is different because he is genuinely interested in Johnson as a writer, and although all the other Johnsonian expectations are there--the tics and quirks, the "bons mots," the opinions and pronouncements and agonies--Lipking keeps his eye firmly on the choices Johnson makes about writing projects. Here is the writer, not the icon or exhibit. Students will love this book, and scholars will find their sense of Johnson subtly enlarged. This is a different kind of Johnson biography and an important and judicious one." --J. Paul Hunter, author of the Gottschalk Prize-winning "Before Novels"

""Samuel Johnson" is a work of remarkable ease, assurance, elegance, learning, and even, dare I say, wisdom. It builds effortlessly on a comprehensive grasp of the Johnsonian scholarship of our century; it consistently steers a middle course through the controversies of Johnson criticism with the same balance and moderation that Lipking praises in Johnson's own writing. Lipking has produced what may well be the last word on Johnson for the twentieth century--a beautifully written synopsis of both the corpus of Johnson's writings and, incidentally, the ways in which those writings have been addressed in the past fifty years." --AdamPotkay, author of "The Fate of Eloquence in the Age of Hume"

Lawrence Lipking is a distinguished scholar and critic and his approach to authorship provides him with an opportunity to analyze and comment upon Johnson's texts...[T]he chapters...provide new insights and are all written thoughtfully and gracefully. The volume provides a valuable approach to Johnson's works, one that supplements biographical studies." --"The Virginia Quarterly Review"

The birth of the author - the letter to Chesterfield; first flowers - Johnson's beginnings; becoming an author - "London", "Life of Savage"; preferment's gate - "The Vanity of Human Wishes"; man of letters - "A Dictionary of the English Language"; the living world - "The Rambler"; reclaiming imagination -"Rasselas"; the theatre of mind - "The Plays of William Shakespeare"; journeying westward - "Political Writings", "A Journey to the Western Islands of Scotland"; touching the shore -"The Lives of the English Poets"; the life to come - Johnson's endings.
GOR002681141
9780674787773
0674787773
Samuel Johnson: Life of an Author by Lawrence Lipking
Lawrence Lipking
Used - Very Good
Hardback
Harvard University Press
1998-11-30
384
N/A
Book picture is for illustrative purposes only, actual binding, cover or edition may vary.
This is a used book - there is no escaping the fact it has been read by someone else and it will show signs of wear and previous use. Overall we expect it to be in very good condition, but if you are not entirely satisfied please get in touch with us
Trustpilot