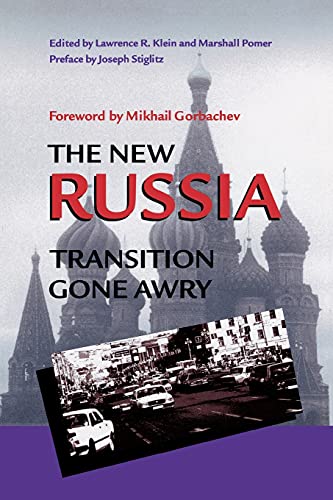 Used Price
$38.99
inc. GST
Free Shipping in Australia
This book delivers an unexpected and unpopular message: the West played a pivotal role in the Russian economic disaster of the 1990s. It shows how Western advisors, including the International Monetary Fund and the U.S. Treasury, applied a narrow conception of economics that pushed Russia, after more than 70 years of communism, toward another failed Utopia.
Very Good

This book delivers an unpopular message: the West has played a pivotal role in the Russian economic disaster of the 1990s. Western advisors, including the International Monetary Fund and the U.S. Treasury, applied a narrow conception of economics that pushed Russia, after more than seventy years of communism, toward another failed utopia.

The twenty-six contributions to this book are divided into three parts: theory, evidence, and policy. Part One directly challenges orthodox economic theory for obscuring the necessary role of government in creating and sustaining a market system and features essays by three Nobel laureates in economics-Kenneth J. Arrow, Lawrence R. Klein, and James Tobin. Part Two describes the dimensions of the economic crisis in Russia and presents a Russian perspective on the failure of shock therapy. Part Three presents policy recommendations, with special attention given to improving the integrity and administrative competence of the Russian government.

"No writing or oratory in history has been more replete with bad advice than that given Russia in the last decade. Here, for a change, is something very good-the best, in fact, that truly competent and responsible American and Russian scholars have to offer. I strongly recommend it." * John Kenneth Galbraith *
"A searching critique of the strategy favored in the West . . . it contributes fresh perspectives on the much debated question concerning the 'big bang' versus 'gradualism' in communist economic transformation." -- Abram Bergson * Harvard University *
"[An] excellent, well-organized, and useful collection about economic reform in postcommunist Russia. . . . The strength of The New Russia lies in the editors' thoughtful and thematic organization of the material, the consistency of argumentation applied to a panoply of economic issues, the depth and rigor of analysis throughout, and the prescription for recovery in the 'Reform Agenda' and 'Call for Action.'" -- Slavic Review
"This admirable work has contributions from an impressive group of specialists who cover the topic comprehensively. Balanced, reasonable transitions in various economic sectors are urged persuasively and in some cases even eloquently. The book has the potential for making a significant impact." -- Ralph T. Fisher, Jr. * University of Illinois at Urbana-Champaign *

Lawrence R. Klein, who won the Nobel Prize in economics in 1980, is Benjamin Franklin Professor of Economics Emeritus at the University of Pennsylvania. Among his many books is The Economics of Supply and Demand. Marshall Pomer is President of the Macroeconomic Policy Institute, Santa Cruz, California. He is the author of Intergenerational Occupational Mobility in the United States: A Segmentation Perspective.

Introduction Part I. Perspective: 1. Economic transition: speed and scope 2. What do we economists know now about the transition to a market system? 3. The transition's initial years 4. Privatization and criminalization 5. Where is Russia now? 6. Economic efficiency and political pressures 7. A roundtable discussion Part II. Proposals: 8. Overall agenda for reform 9. Public wealth funds 10. Economic reintegration of the Commonwealth of Independent States 11. Import tariffs 12. Taxation of mineral wealth 13. Reform of the agricultural sector 14. Reform of the coal industry.

GOR005269007
The New Russia: Transition Gone Awry by Lawrence R. Klein
Lawrence R. Klein
Used - Very Good
Paperback
Stanford University Press
2001-03-31
480
0804741654
9780804741651
N/A
Book picture is for illustrative purposes only, actual binding, cover or edition may vary.
This is a used book - there is no escaping the fact it has been read by someone else and it will show signs of wear and previous use. Overall we expect it to be in very good condition, but if you are not entirely satisfied please get in touch with us.