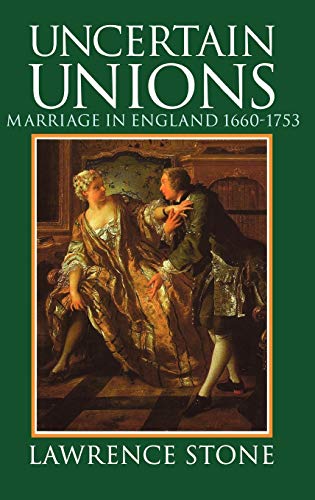 Used Price
$32.99
inc. GST
Free Shipping in Australia
Through a series of case studies drawn from court records, this work shows how courting and marrying couples before the 1753 Marriage Act manoeuvred around the ambiguities of the law. There are stories of unwise courtship, prenuptial pregnancies, forced marriages, bigamy and clandestine marriages.
Very Good

In Road to Divorce, Lawrence Stone explored the different ways in which marriage took place, and analysed the confusion and uncertainty surrounding the legality of the institution in its various forms before the Marriage Act of 1753. He now shows in absorbing detail, through a series of case-studies, how courting and marrying couples tended to manoeuvre around the ambiguities of the law, and how they sometimes became entangled in a web of moral and legal contradiction leading to personal catastrophe. There are stories about unwise courtship, prenuptial pregnancies, forced marriages by parents or parish officials, bigamy, clandestine marriages often performed in haste in peculiarly squalid circumstances and repented at leisure. These fascinating studies reveal in intimate, often ribald detail how men and women adjusted their sexual conduct, moral attitudes, and matrimonial plans to suit an ambiguous legal situation. Professor Stone has traced the ways in which, during the seventeenth and eighteenth centuries, demands by individuals for love and affection were starting to take precedence over family interests and parental dictation in the search for a spouse; the studies he has drawn from court record for Uncertain Unions enable us to see this great moral transition being played out in the lives of men and women, often in their own words. These are vivid, human histories, presented in revealing detail, by the leading historian of the family.

`This book is a fascinating study of matrimony, courtship and morals in the post-Restoration period. ... Altogether a very readable and enjoyable book: Professor Stone has clothed the legal records of the seventeenth and eighteenth centuries with a real vitality that brings the characters to life.' Social History Society Bulletin
`He derives unconcealed enjoyment from the human comedy and he manages to transmit that enjoyment to the reader ... Many readers will enjoy these books for the titillating pleasures they afford; others may be repelled by their coarseness, violence, and brutality. No one will be bored; and those seeking a colorful guide to the sexual escapades of the Hanoverian aristocracy need look no further ... Uncertain Unions is particularly good on servants and domestic arrangements. Stone has a sharp eye for the different nuances of life below stairs.' The New York Review
`gripping, ... sordid, salacious, very human, sometimes hilarious, but mainly sad. ...a superb bedside book of Real Life Stories? I cannot think of a better holiday read. J. H. Plumb, Financial Times
`the book is immensely readable ... these brief peep-shows of long-gone lives are enthralling' Christina Hardyment, Independent
`the absorbing and often extraordinary stories told here, based on the voluminous and hitherto inaccessible records of various ecclesiastical courts, throw a clear, bright light not only upon the making and breaking of marriages in the late 17th and early 18th centuries, but also on social customs and the intimacies of private lives.' Christopher Hibbert, Sunday Times
`A Historical paparazzo with a zoom lens, Lawrence Stone trains his eye on the records of Lambeth Palace and suddenly the blur of the past is in bright focus. ...there's not a dull story in the book. Each one illustrates a point that interests Stone as a historian, but his eye for the ridiculous or touching detail ensures that they can be read as the purest of entertainment' Claire Tomalin, Independent on Sunday
`Professor Stone's inimitable skill as a story-teller brings the formal record to life, and puts human flesh on the bare bones of the law of marriage.' Paul Langford, Sunday Telegraph
`Stone's book records the tragi-comedy of marriage, that perennial triumph of hope over experience.' Roy Porter, Observer
`These are good stories, not only because Stone tells them with an elegant economy, and with a kind understanding of his readers' need for summnary and recapitulation, but also because we are so well rehearsed in their cultural and affective meaning.' Times Higher Education Supplement
`A meticulous documentation of human behaviour.' The Observer
'Lawrence Stone offers another fascinating and important volume, this time on bogus and clandestine marriages. These case-studies provide all the pleasures of a peep-show, bringing the characters before us, often with their very speech, in a series of brilliant little vignettes.' Times Literary Supplement
`It consists of a wide-ranging series of case studies of courtship and marriage practices during a period of peculiar brutality in the marriage relationship. ... Professor Stone's absorbing case-histories read like a series of brilliant short stories that throw much light upon courtship practices ... Uncertain Unions is hilarious, tragic and as colourful as a novel by Thackeray. Reading it will inform and entertain you. And it will convince you that even in bad old 1992 some things for some people are much better.' Richard Holloway, Church Times
'Herein lies the uniqueness of Stone's perspective on English society, [of his] extraordinary sensitivity to the dialectic of public and private lives among the educated elites with whose family archives he is incomparably familiar. This quality has never been so well displayed as in his massive three-volume study of English divorce, of which this is the second part ... an original book with many bold things to say ... well documented and challenging ... it presents rich slices of the lives of average people.' Roy Porter, The New Republic, April 1993
'Uncertain unions is an unputdownable book. The case studies he presents provide a wonderful vista on the world of the verbal marriage contract, clandestine marriages, bigamous relationships, and other means whereby marriages were made in England between 1660 and 1753. Uncertain unions is bold, fascinating and entertaining. Anyone interested in the human condition and the history of human relations in early modern Europe will derive enormous pleasure and not a little knowledge from this book.' James Kelly, St Patrick's College, Drumcondra, Irish Historical Studies
'These colourful tales are entertainingly related by Stone, complementing the more austere analysis in Road to divorce.' R.B. Outhwaite, Gonville and Caius College, The Economic History Review, Volume XLVI, No. 3, August 1993
`colourful tales are entertainingly related by Stone, complementing the more austere analysis in Road to Divorce' The Economic History Review
'let me recommend this book with enthusiasm ... It is a major contribution to both legal and social history, it opens new ground by the use it makes of the Court of Arches records, and it provides a most entertaining excursion into the sordid and little documented underworld of eignteenth century society.' R.L. Brown, The Journal of Legal History, Vol. 15, No. 2, Aug '94
'His long and happily still productive trans-Atlantic career has been distinguished by unequalled conceptual energy, outstanding analytical and organisational powers, and a virtually unchecked flow of crisp and striking judgements couched in ebullient, sparkling prose. ... the sheer human interest of much of his material could hardly be denied,' Wilfrid Prest, Adelaide. Australian Journal of Politics and History. No 3 '93
'rich collection of case histories ... This is history at its most intimate and specific, superbly organised and narrated by our greatest historian of the family.' The Observr