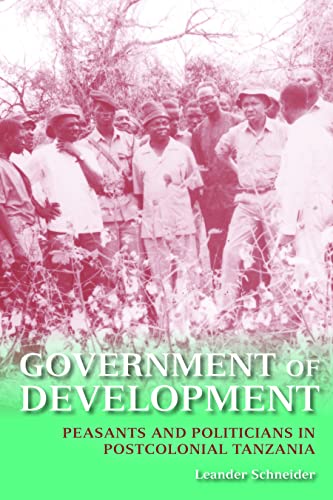 Government of Development by Leander Schneider

What drives state officials to force development projects on resisting beneficiary populations? In his new analysis of the Tanzanian state's 1960s and 1970s campaign to settle the country's rural population in socialist villages, the author traces the discourses and practices that authorized state officials to direct the lives of peasants.

Government of Development: Peasants and Politicians in Postcolonial Tanzania by Leander Schneider

What drives state officials to force development projects on resisting beneficiary populations? In his new analysis of the Tanzanian state's 1960s and 1970s campaign to settle the country's rural population in socialist villages, Leander Schneider traces the discourses and practices that authorized state officials to direct the lives of peasants-by coercive means if necessary. Government of Development shows that the practices constituting this project's mode of government far exceeded political elites' pursuit of their own narrow interests, the go-to explanation for many accounts of similar instances of authoritarian rule and developmental failures in Africa and beyond.

Government of Development makes its argument with vigor, directness, and clarity. Although this is not social history, the book's arguments should resonate with social historians. The fundamental conviction underlying Schneider's argument is that actors in history must be understood not as stereotypes or instruments of class rule, but as complex human characters who exercise agency within particular social constraints. Towards the book's end, having observed that people are driven by 'habit; ideological commitment; vindictiveness; hubris; an unwillingness to surrender; miscalculations, prejudice,' he concludes that history must 'be read from the standpoint of its agents-and thus not backward from outcomes to underlying causes, but forward, as it flows toward an unpredictable future'. . . . These wise words are useful for all historians, and are particularly welcome as a contribution to the study of the postcolonial African state.

Responding to Tanzania's activist state, scholars have produced a rich literature on its government and society, carrying insights that travel well beyond its borders. Leander Schneider's compact new book carries this tradition forward honorably. His study not only helps us understand the lessons of Tanzania's disappointing villagization strategy, but also provides a useful methodology for the analysis of political process.

* The Journal of African History *

Between 1968 and 1977 the Tanzanian government compelled some thirteen million citizens-about 75 percent of the population-to live in registered villages in a process known as ujamaa (socialist) villagization. . . [F]ocuses on official thinking and modes of governance that evolved from an emphasis on freedom and voluntary peasant participation in the mid-1960s to coercion backed by police force by the early 1970s, when most farmers were forced to move. 120.5

1. The Ruvuma Development Association: Tanzania's New Model Villages
2. Culture Clash: The Destruction of the Ruvuma Development Association
3. Chronicle of a Failure Foretold: State Officials' Developmentalist Authority in Action
4. Planning the Future: A Practice and Its Authority-Effects
5. The World of Officials in the Trenches, Potemkin Villages, and Criticism as Treason
6. The Brave Parsimonious World of Materialist-Utilitarian Analysis
Epilogue

NLS9780253013996
9780253013996
0253013992
Government of Development: Peasants and Politicians in Postcolonial Tanzania by Leander Schneider
Leander Schneider
New
Paperback
Indiana University Press
20140917
256
N/A
Book picture is for illustrative purposes only, actual binding, cover or edition may vary.
This is a new book - be the first to read this copy. With untouched pages and a perfect binding, your brand new copy is ready to be opened for the first time
Trustpilot