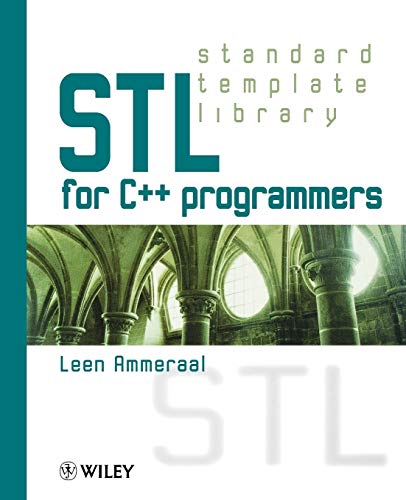 Out of Stock
$74.99
inc. GST
"It is the first book that I have read that makes STL quickly usable by working programmers" Francis Glassborow, Chair of The Association of C & C++ Users (ACCU) STL for C++ programmers Leen Ammeraal The Standard Template Library (STL) provides many useful and generally applicable programming tools.
Very Good
Only 0 left

"It is the first book that I have read that makes STL quickly usable by working programmers" Francis Glassborow, Chair of The Association of C & C++ Users (ACCU) STL for C++ programmers Leen Ammeraal The Standard Template Library (STL) provides many useful and generally applicable programming tools. This book combines reference material and a well-paced tutorial to get you past the basics quickly. Small, complete programs illustrate the key STL features such as containers, algorithms, iterators and function objects. A section is devoted to the new string data type. All STL algorithms are formally presented by their prototypes and then informally described to show how to use them in practice. Concepts are well illustrated with a large number of example programs all of which are available via ftp (for access details please refer to the preface of the book or Wiley's website). Finally, special examples are given to explain the advanced notions of function objects and function adaptors, including predicates, binders and negators.

Leen Ammeraal is a retired lecturer of Hogeschool Utrecht, The Netherlands, where he was employed from 1977 to 1998. He has a degree in mathematics at University of Technology Delft, The Netherlands. He worked as a programmer and mathematician at Akzo Research and Engineering, Arnhem, The Netherlands, from 1961 to 1972 and did research work on compilers from 1972 to 1977 at Mathematical Centre, Amsterdam. He wrote many books for Wiley. Some of his Wiley books have been translated into other languages.

Kang Zhang is a Professor in Computer Science and Director of Visual Computing Lab at the University of Texas at Dallas. He received his B.Eng. in Computer Engineering from the University of Electronic Science and Technology, China, in 1982; and Ph.D. from the University of Brighton, UK, in 1990. He held academic positions in the UK and Australia, prior to joining UTD. Zhang's current research interests are in the areas of visual languages, graphical visualization, and Web engineering; and has published over 130 papers in these areas. He has taught computer graphics and related subjects at both graduate and undergraduate levels for many years. Zhang was also an editor of two books on software visualization.

GOR004484312
STL for C++ Programmers by Leen Ammeraal
Leen Ammeraal
Used - Very Good
Paperback
John Wiley and Sons Ltd
1996-11-20
240
0471971812
9780471971818
N/A
Book picture is for illustrative purposes only, actual binding, cover or edition may vary.
This is a used book - there is no escaping the fact it has been read by someone else and it will show signs of wear and previous use. Overall we expect it to be in very good condition, but if you are not entirely satisfied please get in touch with us.