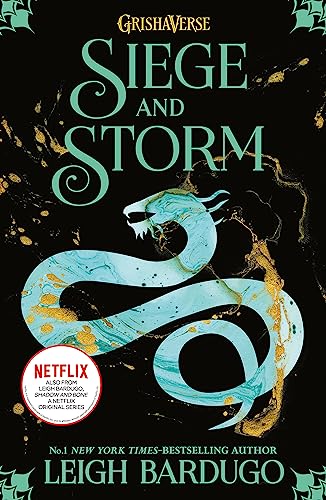 Shadow and Bone: Siege and Storm by Leigh Bardugo

Enter the Grishaverse with book two of the Shadow and Bone Trilogy by number one New York Times-bestselling author Leigh Bardugo. Perfect for fans of Laini Taylor and Sarah J. Maas.

Now with a stunning new cover and exclusive bonus material: Nikolai Lantsov character art and a Q&A with Leigh Bardugo.

Shadow and Bone: Siege and Storm: Book 2 by Leigh Bardugo

*The Grishaverse will be coming to Netflix soon with Shadow and Bone, an original series!*

Enter the Grishaverse with book two of the Shadow and Bone Trilogy by number one New York Times-bestselling author Leigh Bardugo. Perfect for fans of Laini Taylor and Sarah J. Maas.

Now with a stunning new cover and exclusive bonus material: Nikolai Lantsov character art and a Q&A with Leigh Bardugo.

Soldier. Summoner. Saint. Alina Starkov's power has grown, but not without a price. She is the Sun Summoner - hunted across the True Sea, haunted by the lives she took on the Shadow Fold. But she and Mal can't outrun their enemies for long.

The Darkling is more determined than ever to claim Alina's magic and use it to take the Ravkan throne. With nowhere else to turn, Alina enlists the help of an infamous privateer and sets out to lead the Grisha army.

But as the truth of Alina's destiny unfolds, she slips deeper into the Darkling's deadly game of forbidden magic, and further away from her humanity. To save her country, Alina will have to choose between her power and the love she thought would always be her shelter. No victory can come without sacrifice - and only she can face the oncoming storm.

Read all the books in the Grishaverse!

The Language of Thorns: Midnight Tales and Dangerous Magic

Siege and Storm carries on the fantastic plot which was so intricately carved in book one, and the writing continues to be clever, funny and heartbreaking all at the same time. This book will have you laughing one minute and an emotional wreck the next, as Alina's powers are pushed to the limit and her relationships are tested to breaking point. I for one cannot wait for the third and final book. * BOOK CHICK CITY *
I was away on the ships and wandering through Ravka with Alina and Mal, I was on the receiving end of his kisses and his annoyances. I felt the sun warm the pages whenever Alina summoned and I felt the fear when The Darkling was around. There is nothing I don't love about the world in which the Grisha trilogy is set and I cannot wait until next year to see how this series is going to conclude. * READARAPTOR *

I wrote a piece here gushing about why the Grisha series is so different and so special. There are many small reasons that all come together to create the awesomeness. But there are also many more that I can't even explain. Maybe it is different because it is just magic. It has the most exquisitely constructed world, the best-written characters, the most amazing writing and storyline. And it always always always leaves me desperate for more. It always leaves me aching, foaming at the mouth, for more: right now. And that, perhaps, is why it is so special. It is magic. It is beautiful. It is perfect.
Well, except for that cliffhanger. How am I meant to make it a whole year with that hanging over my head?!

* THE BOOK ADDICTED GIRL *
Leigh Bardugo, you sure know how to involve your readers and make them an emotional wreck. Siege and Storm is an enthralling sequel that seriously ups the game and expectations of the reader. It is written so beautifully that is flows flawlessly while keeping the magic alive in the readers mind. If you want to read a fantasy series that has a truly unique world then read this series. * READ WRITE AND READ SOME MORE *
Wow, wow, wow - that's all I can say. Siege and Storm only confirms that Leigh Bardugo is a must-read author for all teenage bookworms and fantasy fans! Set in a beautiful and magical fictional land, the novel draws you in with its vivid imagery and unique array of characters... If you haven't entered the world of Grisha yet, then why on earth not?! I mean, you know a novel is superb when words fail you and you just can't coherently speak anymore... right? * FEED ME BOOKS NOW *
In so many series the second book is a huge let-down. Siege and Storm? An exception. It is a squillion times better than Shadow and Bone... I adore the writing - it's so lyrical, so beautiful, yet so modern and witty and funny. I love this blend of classic fairytale and modern day. And it always seems to leave me wanting more! And the plot was amazing too. It was just nonstop action, nonstop thrills, nonstop suspense and nonstop excitement. I gobbled it up, falling harder in love each time. And then having my heart totally broken. Numerous times... I didn't see ninety-nine percent of the twists coming and could have just read this three-hundred-odd-paged-book in one sitting! You know, if I didn't need sleep and food and stuff... -- The Book Addicted Girl * GUARDIAN TEEN BOOKS *

Leigh Bardugo is the number one New York Times bestselling author fantasy novels and the creator of the Grishaverse. With over one million copies sold, her Grishaverse spans the Shadow and Bone trilogy, the Six of Crows duology and The Language of Thorns. She was born in Jerusalem, grew up in Los Angeles, graduated from Yale University, and has worked in advertising, journalism, and most recently, makeup and special effects. These days, she lives and writes in Hollywood, where she can occasionally be heard singing with her band.

NGR9781510105263
9781510105263
1510105263
Shadow and Bone: Siege and Storm: Book 2 by Leigh Bardugo
Leigh Bardugo
Shadow and Bone
New
Paperback
Hachette Children's Group
2018-06-26
416
N/A
Book picture is for illustrative purposes only, actual binding, cover or edition may vary.
This is a new book - be the first to read this copy. With untouched pages and a perfect binding, your brand new copy is ready to be opened for the first time
Trustpilot