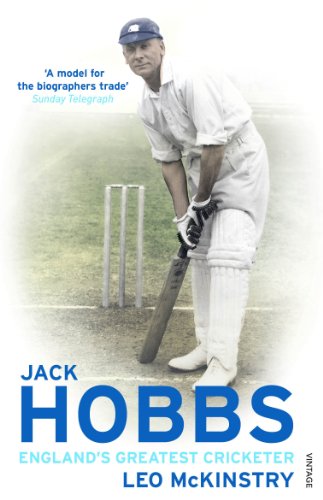 In Stock
$19.49
inc. GST
The astonishing feats of Sir Jack Hobbs continue to resonate more than a century after he first played Test cricket. He changed the art of batting with his elegant style, and transformed the status of professional cricketers through the strength of his personality.
Like New Very Good Well Read
Only 1 left

The astonishing feats of Sir Jack Hobbs continue to resonate more than a century after he first played Test cricket. During his long career that stretched from the age of W.G. Grace to the era of Don Bradman, he scored more first-class runs and centuries than any player. Even today, he remains England's greatest run maker in Ashes Tests. He changed the art of batting with his elegant style, and transformed the status of professional cricketers through the strength of his personality. Born into poverty, Hobbs rose to have a central role in some of Test cricket's most explosive series, but not without controversy and dispute. At last here is a comprehensive biography of Hobbs, giving us fresh insights into every aspect of his story. SHORTLISTED FOR THE BRITISH SPORTS BOOK AWARDS 2012 CRICKET BOOK OF THE YEAR.

"Leo McKinstry has written an intelligent, straightforward account of Hobbs, both as man and as cricketer" -- Robert Cheshire * Literary Review *
"This learned and wide-ranging book skilfully recreates a vanished world and resuscitates the reputation of one who might well be England's greatest cricketer" -- Marcus Berkman * Daily Mail *
"McKinstry captures the spirit of this thoroughly decent man, and also the spirit of the age where he dominated" -- Michael Henderson * Spectator *
"Magnificent... A tender and intriguing picture of the man" -- Michael Simkins * Mail on Sunday *
"It makes for excellent social history... McKinstry does an excellent job, recounting Hobb's exploits with impressive thoroughness" -- Simon Wilde * Sunday Times *

Leo McKinstry, born in Belfast in 1962, writes regularly for the Daily Express, the Daily Mail and the Spectator. He has written nine books, including a life of Geoff Boycott, which was recently named one of the finest cricket books written in a Wisden poll. His biography of Jack and Bobby Charlton was a top-ten bestseller and won the Sports Book of the Year award, while his study of Lord Rosebery won Channel Four Political Book of the year. Most recently he has written a trilogy about the RAF in the Second World War.

GOR010725222
Jack Hobbs by Leo McKinstry
Leo McKinstry
Used - Like New
Paperback
Vintage Publishing
2012-05-03
432
0224083309
9780224083300
N/A
Book picture is for illustrative purposes only, actual binding, cover or edition may vary.
The book has been read, but looks new. The book cover has no visible wear, and the dust jacket is included if applicable. No missing or damaged pages, no tears, possible very minimal creasing, no underlining or highlighting of text, and no writing in the margins.