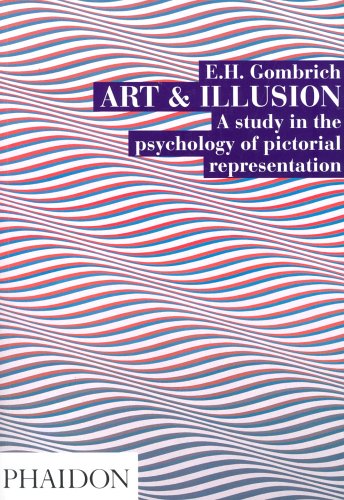 Art and Illusion
by Leonie Gombrich

Art and Illusion: A Study in the Psychology of Pictorial Representation by Leonie Gombrich

Described by Kenneth Clark as 'one of the most brilliant books of art criticism that I have ever read', Art and Illusion is a classic study of image-making. It seeks to answer a simple question: why is there such a thing as style? The question may be simple but there is no easy answer, and Professor Gombrich's brilliant and wide-ranging exploration of the history and psychology of pictorial representation leads him into countless crucial areas.

Gombrich examines, questions and re-evaluates old and new ideas on such matters as the imitation of nature, the function of tradition, the problem of abstraction, the validity of perspective and the interpretation of expression: all of which reveal that pictorial representation is far from being a straightforward matter.

First published more than 40 years ago, Art and Illusion has lost none of its vitality and importance. In applying the findings of experimental science to a nuanced understanding of art and in tackling complex ideas and theoretical issues, Gombrich is rigorous. Yet he always retains a sense of wonder at the inexhaustible capacity of the human brain, and at the subtlety of the relationships involved in seeing the world and in making and seeing art.

With profound knowledge and his exceptional gift for clear exposition, he advances each argument as an hypothesis to be tested. The problems of representation are forever fundamental to the history of art: Art and Illusion remains an essential text for anyone interested in understanding the complexities of art.

For the sixth edition Professor Gombrich has written an entirely new 12-page preface, in which he makes use of the distinction between an image and a sign, so as to clarify his intentions in writing the book in the first place.

"This was a seminal book and remains an enjoyable unfolding of the mysteries of art."-The Times

"I shall remember about it is the author's warmth and wit, the fabulous range of his references and the richness of personality that lies behind the whole performance."-The New York Times

"...It brought the topic of the visual back to the centre of the history of the visual arts, from where it had been strangely displaced."-The Economist

Sir Ernst Gombrich was one of the greatest and least conventional art historians of his age, achieving fame and distinction in three separate spheres: as a scholar, as a popularizer of art, and as a pioneer of the application of the psychology of perception to the study of art. His best-known book, The Story of Art - first published fifty years ago and now in its sixteenth edition - is one of the most influential books ever written about art. His books further include The Sense of Order (1979) and The Preference for the Primitive (2002), as well as a total of 11 volumes of collected essays and reviews.

GOR003713402
Art and Illusion: A Study in the Psychology of Pictorial Representation by Leonie Gombrich
Leonie Gombrich
Used - Very Good
Paperback
Phaidon Press Ltd
2002-04-17
402
0714842087
9780714842080
N/A
Book picture is for illustrative purposes only, actual binding, cover or edition may vary.
This is a used book - there is no escaping the fact it has been read by someone else and it will show signs of wear and previous use. Overall we expect it to be in very good condition, but if you are not entirely satisfied please get in touch with us.