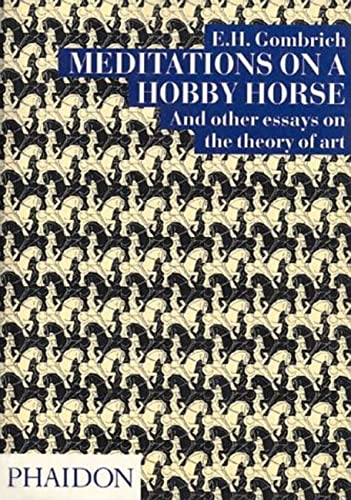 Meditations on a Hobby Horse
by Leonie Gombrich

Meditations on a Hobby Horse Summary

Meditations on a Hobby Horse: And Other Essays on the Theory of Art by Leonie Gombrich

Prompted by modern critical discussions, the 14 papers, lectures and articles assembled in this volume revolve around key issues raised by twentieth-century art and theory.

Characteristic of his thought-provoking use of diverse sources for inspiration and exploration, this book embodies a timelessly powerful corpus of Gombrich's ground-breaking thought.

Meditations on a Hobby Horse Reviews

"A worthy successor to the earlier books, exhibiting to a high degree their author's supreme merit as a theorist of art."-New Statesman

Ernst Gombrich was one of the greatest and least conventional art historians of his age, achieving fame and distinction in three separate spheres: as a scholar, as a popularizer of art, and as a pioneer of the application of the psychology of perception to the study of art. His best-known book, The Story of Art - first published 50 years ago and now in its sixteenth edition - is one of the most influential books ever written about art. His books further include The Sense of Order (1979) and The Preference for the Primitive (2002), as well as a total of 11 volumes of collected essays and reviews.

Meditations on a hobby horse or the roots of artistic form; visual metaphors of value in art; psychoanalysis and the history of art; on physiognomic perception; expression and communication; achievement in medieval art; Andre Malraux and the crisis of expressionism; the social history of art; tradition and expression in Western still life; art and scholarship; imagery and art in the romantic period; the cartoonist's armoury; the vogue of abstract art; illusion and visual deadlock.

GOR002687608
Meditations on a Hobby Horse: And Other Essays on the Theory of Art by Leonie Gombrich
Leonie Gombrich
Used - Very Good
Paperback
Phaidon Press Ltd
1994-09-08
256
0714832456
9780714832456
N/A
Book picture is for illustrative purposes only, actual binding, cover or edition may vary.
This is a used book - there is no escaping the fact it has been read by someone else and it will show signs of wear and previous use. Overall we expect it to be in very good condition, but if you are not entirely satisfied please get in touch with us.