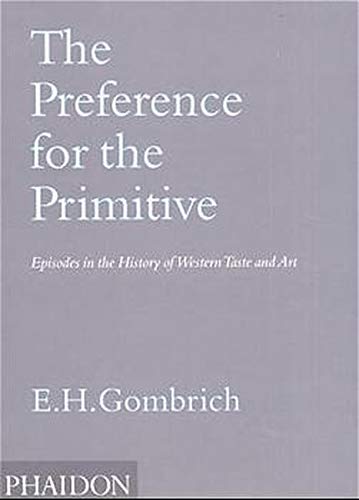 The Preference for the Primitive
by Leonie Gombrich

Out of Stock
$41.99
inc. GST
Professor Gombrich's last book and first narrative work in over 20 years.
Very Good
Only 0 left

The Preference for the Primitive Summary

The Preference for the Primitive: Episodes in the History of Western Taste and Art by Leonie Gombrich

This monumental book - the last to be completed by the author - is a study of a recurring phenomenon in the history of changing taste in the visual arts: the feeling that older and less sophisticated (i.e. 'primitive') works are somehow morally and aesthetically superior to later works that are perceived as comparatively soft and decadent.

In his first narrative work for over two decades, Professor Gombrich traces this fundamental idea back to Classical Antiquity, where he links it both with Cicero's observation that over-indulgence of the senses leads to a feeling of disgust, and with the profoundly influential metaphor comparing the development of art to that of a living organism. Like an organism, art grows to maturity then decays and dies: successive generations of artists and critics have preferred the strength, nobility and sincerity of earlier styles to the more refined later styles with their corrupting and meretricious appeal to the senses.

After reviewing the Classical authors whose writings largely set the terms of the debate, Gombrich then charts its progress since its revival in the eighteenth century, documenting the often subtle shifts of taste and judgement that frequently focus on the pivotal role of Raphael. In the final chapters, he turns to the truly revolutionary primitivism of the twentieth century, analysing the momentous shifts of taste before which he was himself an eyewitness. Assimilating more than 40 years of study and reflection on this theme, the book presents a vividly argued narrative, supported by extensive quotations that document with acute precision the role of authors, critics and artists in shaping and changing opinion. Principal and pioneering both as a personal testament and as a documentary anthology, this long-anticipated book provides a deep and revealing insight into the history and psychology of taste.

The Preference for the Primitive Reviews

'The great strength of this book is its historical sweep ... of interest to specialists and general readers alike.' (Colin Rhodes, Loughborough University, The Burlington Magazine) 'A masterpiece of skilful discourse.' (Nigel Spivey, The Daily Telegraph) 'Gombrich is as usual masterly and vastly erudite.' (Martin Gayford, The Sunday Telegraph) 'Gombrich brings his massive learning to bear on a very interesting set of questions.' (The Spectator) 'Gombrich remains a giant of art history who tried to demystify the processes by which art is made. If Winckelmann yearned for 'noble simplicity' in art, and if Wackenroder preached 'pious simplicity', then Gombrich can be regarded as the High Priest of 'rational simplicity'.' (James Hall, Times Literary Supplement) 'Throughout, Gombrich's account is supported by his easy familiarity with the writings of philosophers and aestheticians, of anthropologists and psychologists, but in the end what gives his approach such a rich tension is the fact that he remained fundamentally and unfashionably committed to the idea that an increase in mimetic skill represented a form of progress, and that the term primitive did not need to be hedged about with guilt-wracked inverted commas.' (Apollo) 'Has there been an individual who could match Gombrich's gargantuan grasp of classical sources, the sheer scope of his reading? No ... The Preference for the Primitive ... is lively and can be assimilated by artists, art historians and general readers alike.' (Modern Painters) 'The book is a remarkable one, demonstrating in full measure Gombrich's extraordinary erudition ... acts as a convenient summary of many of the themes and issues to which he devoted a long and exceptionally distinguished career.' (Charles Saumarez Smith, Director, National Gallery, London, Literary Review) 'Take(s) on just about the weightiest and most controversial subject currently available for art-historical picking-over. For Gombrich to delay until his final book before taking on the appetite for perfectionism is akin to Michelangelo waiting until he was 92 before embarking upon the Sistine ceiling.' (Waldemar Januszczak, The Sunday Times) 'The Preference for the Primitive deserves a place within any art library, completing the life's work of an important twentieth century writer.' (Art Documentation) 'Gombrich narrates these enchanting chapters in the history of taste with his usual clarity and ear for the eloquent quotation.' (The New Republic) 'Over the last half century we have come to expect from Gombrich work of extensive and detailed scholarship, nuanced, balanced, and rich in insight. This, his final work, upholds the standard he set ... This work is a final treasure for all interested in art and the history of ideas.' (Religious Studies Review)

Sir Ernst Gombrich was one of the greatest and least conventional art historians of his age, achieving fame and distinction in three separate spheres: as a scholar, as a popularizer of art, and as a pioneer of the application of the psychology of perception to the study of art. His best-known book, The Story of Art - first published 50 years ago and now in its sixteenth edition - is one of the most influential books ever written about art. His books further include The Sense of Order and Art & Illusion, as well as a total of 11 volumes of collected essays and reviews.

Preface; 1 Plato's Preferences; Interlude: Progress or Decline? 2 The Ascendancy of the Sublime; 3 The Pre-Raphaelite Ideal; 4 The Quest for Spirituality; 5 The Emancipation of Formal Values; Interlude: New Worlds and New Myths; 6 The Twentieth Century; Interlude: The Lure of Regression; 7 Primitive - In What Sense? Postscript: The Study of Antiquities Notes; Index

GOR002195957
The Preference for the Primitive: Episodes in the History of Western Taste and Art by Leonie Gombrich
Leonie Gombrich
Used - Very Good
Hardback
Phaidon Press Ltd
2002-08-01
324
0714841544
9780714841540
N/A
Book picture is for illustrative purposes only, actual binding, cover or edition may vary.
This is a used book - there is no escaping the fact it has been read by someone else and it will show signs of wear and previous use. Overall we expect it to be in very good condition, but if you are not entirely satisfied please get in touch with us.