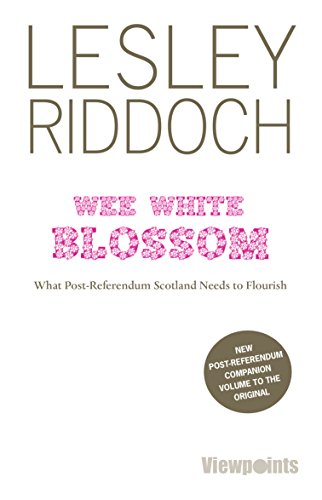 Used Price
$15.99
inc. GST
Free Shipping in Australia
This is a plain-speaking, incisive call to restore equality and control to local communities and let Scotland flourish.

Wee White Blossom is the ideal companion volume to Blossom, whether you want an update on the first edition or an appetiser before delving into the pages of the original.
Very Good Good

So stands Scotland where it did? Not on your nelly.

The professional classes in Scotland may be busy with Commissions, vows, deals, submissions and General Election planning but the wider Yes Movement is busy with huge spontaneous meetings involving hundreds, even thousands of people - gatherings like birds flocking before winter or starlings swooping to throw shapes into darkening skies. Because they can.

Wee White Blossom is a post-indyref, poppadom-sized version of Blossom for folk who've already sampled the full bhuna. It updates Blossom with a new chapter on Scotland's Year of Living Dangerously. Lesley Riddoch shares her thoughts on the Smith Commission, the departure of Gordon Brown, the return of Alex Salmond and the latest developments in land reform and local control. She considers the future of the SNP, the Radical Independence Campaign, Common Weal, Women for Independence and Scottish Labour in the aftermath of the referendum. This is a plain-speaking, incisive call to restore equality and control to local communities and let Scotland flourish.

Wee White Blossom is the ideal companion volume to Blossom, whether you want an update on the first edition or an appetiser before delving into the pages of the original.

The most influential, passionate and constructive book to appear during the referendum campaign. Blossom seized readers because it argued for independence as means to an end - restoring control over their own lives to Scottish communities so disempowered by top-down authority that they had no real experience of democracy. - NEAL ASCHERSON

Not so much an intervention in the independence debate as a heartfelt manifesto for a better democracy. - ESTHER BREITENBACH, Scotsman

LESLEY RIDDOCH is an award-winning broadcaster, writer and journalist. She writes weekly columns for The Scotsman and Sunday Post and is a regular contributor to The Guardian, Newsnight Scotland, Scotland Tonight and Any Questions. She is founder and Director of Nordic Horizons, a policy group that brings Nordic experts to the Scottish Parliament.

Lesley presented You and Yours on BBC Radio 4, The Midnight Hour on BBC 2 and The People's Parliament and Powerhouse on Channel 4. She founded the Scottish feminist magazine Harpies and Quines, won two Sony awards for her daily Radio Scotland show and edited The Scotswoman - a 1995 edition of The Scots man written and edited by its female staff. She lives in Fife and is married to an Englishman who grew up in Canada.

GOR006879538
Wee White Blossom: What Post-Referendum Scotland Needs to Flourish by Lesley Riddoch
Lesley Riddoch
Used - Very Good
Paperback
Luath Press Ltd
2014-12-15
128
1908373997
9781908373991
N/A
Book picture is for illustrative purposes only, actual binding, cover or edition may vary.
This is a used book - there is no escaping the fact it has been read by someone else and it will show signs of wear and previous use. Overall we expect it to be in very good condition, but if you are not entirely satisfied please get in touch with us.