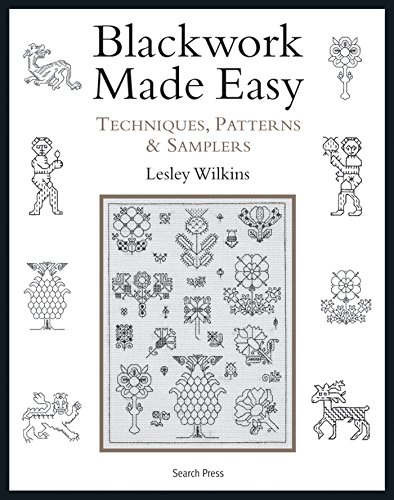 Blackwork Made Easy
by Lesley Wilkins

Lesley Wilkins shares her passion for blackwork embroidery and shows how to produce traditional motifs, borders, patterns and full band samplers using simple stitches that are explained by step by step photography. Charts are provided.

Blackwork Made Easy: Techniques, Patterns and Samplers by Lesley Wilkins

Lesley Wilkins shows how to create traditional blackwork embroideries using simple stitches on evenweave fabric. Step by step photographs and a wealth of charts illustrate how traditional motifs, patterns and borders can be combined to create stunning designs. Lesley then goes on to show how to create band samplers inspired by those on which sixteenth century embroiderers collected their favourite designs, including figures, flowers, plants, birds and animals. Lesley Wilkins combines a deep knowledge of and appreciation for historical embroideries with her own flair for design and practical teaching skill. This book contains all you need to know to produce beautiful embroideries inspired by history.

Blackwork is usually stitched on Aida, evenweave or handanger fabric, something that has an even number of threads across the fabric ( the weft thread ) and going down the fabric ( the warp thread).
Lesley talks about design and symbolism in Blackwork which dates back to 15c and is
Sometimes known as Spanish work.

While this is a traditional technique Lesley has brought a more modern twist to some designs and introduced colour.

This book is full of design ideas from individual motifs to more complicated patterns and borders.

Lesley in her books sums it up beautifully. " This book contains all you need to know to produce beautiful embroideries."

Blackwork was brought to England from Spain in the early 16th century by Catherine of Aragon, and this Arabic style of embroidery morphed into something more English than Spanish over the years. Wilkins (Beginner's Guide to Blackwork) introduces the basics of blackwork (e.g., selecting the appropriate thread and canvas and choosing stitches and motifs), then presents a variety of blackwork charts, including several inspired by a 1598 sampler owned by the Victoria and Albert Museum. Blackwork does not need to be sewn with black thread, and several of the patterns are quite colorful. VERDICT Crafters who cross-stitch or embroider may appreciate blackwork as well-especially if they enjoy Tudor-era motifs.

Lesley Wilkins discovered blackwork samplers on a school visit to the Victoria and Albert Museum in London, and has been hooked ever since. Her fascination with the craft has led her to become not only an embroiderer of extraordinary skill, but also an expert in the history of blackwork. She has collected thousands of patterns from all over the world, and her own work is inspired by historical motifs, patterns and borders. Her designs have appeared in Needlecraft and Needlework magazines. When she is not working in local government, Lesley runs a website for blackwork and Victorian cross stitch enthusiasts, providing custom-made kits and charts of her own designs.

1) Shows how to create beautiful embroideries using simple stitches.
2) Packed with historical insight and inspiring embroideries.
3) Step by step photographs provided for the stitches, and graphs for the patterns, motifs and band samplers.

GOR005801218
Blackwork Made Easy: Techniques, Patterns and Samplers by Lesley Wilkins
Lesley Wilkins
Used - Very Good
Paperback
Search Press Ltd
2011-12-19
96
1844487539
9781844487530
N/A
Book picture is for illustrative purposes only, actual binding, cover or edition may vary.
This is a used book - there is no escaping the fact it has been read by someone else and it will show signs of wear and previous use. Overall we expect it to be in very good condition, but if you are not entirely satisfied please get in touch with us.