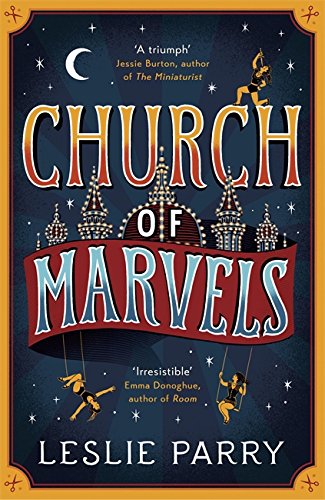 Church of Marvels
by Leslie Parry

Church of Marvels by Leslie Parry

New York, 1895. It's late on a warm city night when Sylvan Threadgill, a young night soiler who cleans out the privies behind the tenement houses, pulls a terrible secret out from the filthy hollows: an abandoned newborn baby. An orphan himself, Sylvan was raised by a kindly Italian family and can't bring himself to leave the baby in the slop. He tucks her into his chest, resolving to find out where she belongs.

Odile Church is the girl-on-the-wheel, a second-fiddle act in a show that has long since lost its magic. Odile and her sister Belle were raised in the curtained halls of their mother's spectacular Coney Island sideshow: The Church of Marvels. Belle was always the star-the sword swallower-light, nimble, a true human marvel. But now the sideshow has burnt to the ground, their mother dead in the ashes, and Belle has escaped to the city.

Alphie wakes up groggy and confused in Blackwell's Lunatic Asylum. The last thing she remembers is a dark stain on the floor, her mother-in-law screaming. She had once walked the streets as an escort and a penny-Rembrandt, cleaning up men after their drunken brawls. Now she is married; a lady in a reputable home. She is sure that her imprisonment is a ruse by her husband's vile mother. But then a young woman is committed alongside her, and when she coughs up a pair of scissors from the depths of her agile throat, Alphie knows she harbors a dangerous secret that will alter the course of both of their lives...

On a single night, these strangers' lives will become irrevocably entwined, as secrets come to light and outsiders struggle for acceptance. From the Coney Island seashore to the tenement-studded streets of the Lower East Side, a spectacular sideshow to a desolate asylum, Leslie Parry makes turn-of-the-century New York feel alive, vivid, and magical in this luminous debut. In prose as magnetic and lucid as it is detailed, she offers a richly atmospheric vision of the past marked by astonishing feats of narrative that will leave you breathless.

Leslie Parry is a graduate of the Iowa Writers' Workshop and was recently a resident at Yaddo and The Kerouac House. Her writing has also received a National Magazine Award nomination and an honorable mention in The Best American Short Stories 2013. She lives in Chicago.

GOR007007183
Church of Marvels by Leslie Parry
Leslie Parry
Used - Very Good
Paperback
John Murray Press
2015-05-07
320
1473605636
9781473605633
N/A
Book picture is for illustrative purposes only, actual binding, cover or edition may vary.
This is a used book - there is no escaping the fact it has been read by someone else and it will show signs of wear and previous use. Overall we expect it to be in very good condition, but if you are not entirely satisfied please get in touch with us.