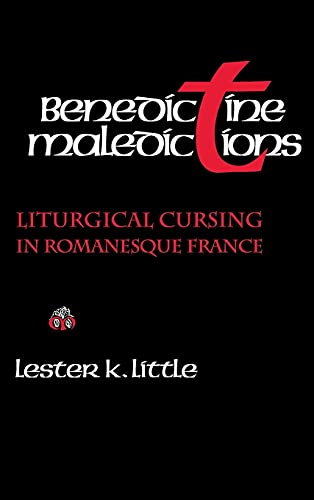 A reconstruction and exploration of the phenomenon of religious cursing in medieval Europe.

"'May they be cursed in the chest and the heart, cursed in the stomach, cursed in the blood, cursed in the hands and feet and each of their members." Monks in medieval France lay flat before the altar as they intoned these maledictions laced with biblical quotations or paraphrases: "May their children be made orphans and their wives widows" (Psalm 108:9).

In this long-awaited book, the result of more than a decade of research, Lester K. Little reconstructs and explores the phenomenon of officially sanctioned religious cursing in medieval Europe. He focuses on a church service, called in Latin either clamor or maledictio, used by monastic communities (primarily in Francia) between approximately 990 and 1250.

Threatened by bands of heavily armed knights in a period of incessant civil strife, communities of monks, nuns, and cathedral clerics retaliated by cursing their enemies in a formal religious ceremony. After presenting the formulas the monks used in such cursing, Little explores the social, political, and juridical contexts in which these curses were used and explains how Christian authorities who condemned cursing could also authorize it. He demonstrates that these Benedictine maledictions often played a decisive role in resolving the monks' frequent property disputes wit local notables, especially knights.

Little's approach to his subject is topical. After determining the clamor's sources, he takes up its kinship with such related liturgy as the humiliation of saints and then shows where and to what end it was used. By the conclusion of his work, he has recreated the whole culture of the medieval clamor, and in the process he has illuminated many other aspects of medieval social and legal culture.

"Little begins with a custom that may seem quaint; he ends by leading the reader through a series of centrally important historical developments, and in most cases he succeeds in showing their relevance to this extraordinary custom of liturgical cursing."

"'May they be cursed in town and cursed in the fields. May their barns be cursed and may their bones be cursed. May the fruit of their loins be cursed as well as the fruit of their lands.' French monks of the Middle Ages hurled curses like these at their enemies, seeking supernatural assistance when no secular judge could help them. In a long-awaited book written with elegance and erudition, Lester Little undertakes the first full-length study of these maledictions.... The book's focus is the way that religious communities-especially the monks who followed Benedict's Rule and hence were known by his name-used liturgical cursing to safeguard their integrity and their possessions, against both laymen and other ecclesiastics."

"Professor Little has carried out in masterly fashion his stated goal, the re-creation of the whole cutlure of medieval clamor, and in the process he has illuminated many other aspects of medieval religious, social, and legal practices. His book, filled with charming personal asides, will be duly appreciated by scholars, admirers, and nonspecialists."

Lester K. Little is Dwight W. Morrow Professor of History at Smith College. He is the author of numerous articles and books, including Religious Poverty and the Profit Economy in Medieval Europe, also from Cornell.

GOR010740149
Benedictine Maledictions: Liturgical Cursing in Romanesque France by Lester K. Little
Lester K. Little
Used - Very Good
Hardback
Cornell University Press
1993-11-18
312
0801428769
9780801428760
N/A
Book picture is for illustrative purposes only, actual binding, cover or edition may vary.
This is a used book - there is no escaping the fact it has been read by someone else and it will show signs of wear and previous use. Overall we expect it to be in very good condition, but if you are not entirely satisfied please get in touch with us.